This page is for the Weatherbot. For the G.I. Joe Arctic Attack Soldier, see Sergeant Blizzard. 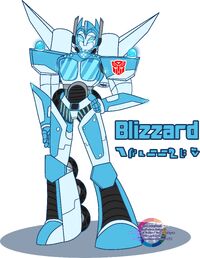 Of all the Weatherbots, BLIZZARD is probably the most calm and collected. As the XO to the team, her seemingly never-ending calm is the perfect counterbalance to the hothead commander, Stormwind. She is reliable to a fault, both as the XO, and in her main function, as the technician and medic of the team. Her patience allows her to not get worked up on a complex repair or adjustment of something delicate, she will take as long of time as it needs, continually being gentle with it. She is said to be able to build or repair anything that's sent her way. She is modest enough to disagree, though she is in fact brilliant in her field. She is a gentle giant, in fact, with her double trailer semi altmode. She towers up over all the other girls, and most all the other Autobots, from this, it makes her a bit self-conscious of herself, especially since she is extremely strong as well. Her back trailer in semi mode is a medical trailer, while the fore houses her Doppler/nexrad instrumentation. She can heal humans as well as Transformers, within it, as well as in robot mode. Blizzard is highly reinforced, especially in the nose area, which can be used as a ramming prow, as well as being able to shoot an icy liquid nitrogen blast to freeze people in their tracks, from the grille. She also has the liquid nitrogen ability in robot mode, as well as a rocket launcher, laser pistol, and her strength, should the need arise for her to battle. She can attain top speed on road of 160 mph, can attain 100 mph speeds off road. Merges with the other Weatherbots into F-5, as the main body.

Blizzard was built in 1997 by Wheeljack.

When Mal used the V'Ger's space-folding drive to teleport past the Plait Expanse into orbit around Cybertron, and attacked the Weatherbots outside the Temple of Knowledge, Blizzard joined Alpha Trion, Dust Devil, Professor Razorclaw, and the rest of the Weatherbots in fighting them off. Mal's crew defeated, Mal was forced to retreat into the mountains, leaving his ship in the hands of the Autobots.

Blizzard discovered the V'ger engineer Aria hiding in the engine room, and with Stormwind's help coaxed her out of hiding. Realizing that one of Aria's little helpers was actually the trapped core of Shattered Glass Laserbeak, Blizzard rescued the Decepticon interrogator and built it a new body out of scrap and spare parts found aboard the V'ger.

Blizzard was on the V'ger when it crashed in Kaon.

In 2014, First Aid was able to reverse the effects of the Dweller virus on the Weatherbots, using a modified version of the cure developed by Jetfire and Starscream.

In 1997, Blizzard was built in an attempt to create weather drones for G.I. Joe. She transforms into an armored personnel carrier. While her intelligence is limited, her shell personality is programmed to act as a robot adviser for medics in the field.

Blizzard is by far the largest Weatherbot.

Blizzard was once played by Swiftpaw. In 2001 she was temped by Stormwind. Since 2019 she is temped by Zero.