This page is for the heroic Shattered Glass Decepticon triple-changer Blitzwing. For his evil main-universe counterpart, see Blitzwing. 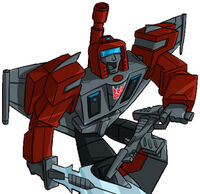 "Think before you destroy. Not everything can be rebuilt."

Blitzwing is one of Megatron's quieter Decepticons, content to be alone with just his thoughts for company. As a Triple Changer, Blitzwing's ability to slowly transform from tank mode to jet fighter mode makes him one of the most lethally effective Decepticon warriors, although what Blitzwing would really prefer would be a chance to just sit, read, and enjoy the sunshine. Blitzwing rather hates changing form - while flying is OK, he doesn't like the implications of becoming either of his war-machine altmode. His least-favorite tactic of last resort is to dive at a target - living or otherwise - as a jet, change at the last moment to a tank, and then smash into the target just as he lands. This hardly ever fails to defeat a foe, although it is rather painful for Blitzwing, both physically and psychologically. He doesn't think of himself as funny, but sometimes his gentle nature contrasted with his frighting weaponry make his allies chuckle. Blitzwing doesn't really get the joke, but he's happy just to make people smile around him.

As a MIG-25 fighter jet fighter, Blitzwing can fly at Mach 3.2 with a range of 1,075 miles. He carries heat-seeking concussion missiles. As a Type-74 assault tank, he can traverse most terrain, however rugged, and can achieve a speed of 33 mph. His track-mounted M68 105 mm gun fires an explosive shell 3.5 miles that can level a 5-story brick building. In robot mode he uses an electron scimitar which can hack into any electrical device with a touch of its blade, and a gyro-blaster rifle, which disrupts the sense of balance of anyone it hits for 30 minutes.

Blitzwing transformation is smooth and flawless, although slower than most Transformers. He is close friends with Astrotrain, with whom he loves to have long philosophical discussions over a drum of energon. Having spent the last few million years on a homeworld he politely describes as "a planet-sized junkyard, partially on fire", Blitzwing is mesmerized by the naturally-occurring life and beauty of Earth.

Blitzwing was a member of the Decepticons selected for Starscream's detachment on planet Earth. Having spent the last few million years on a homeworld he politely described as "a planet-sized junkyard, partially on fire", Blitzwing is mesmerized by the naturally-occurring life and beauty of Earth he viewed in intercepted transmissions.

Blitzwing unfortunately missed the Nemesis launch, and instead remained behind on Cybertron, where he attempts to protect innocent civilians from Autobot assault.

Blitzwing is available for temping.