This page is for the evil Decepticon triple-changer Blitzwing. For his heroic Shattered Glass counterpart, see Blitzwing (SG). 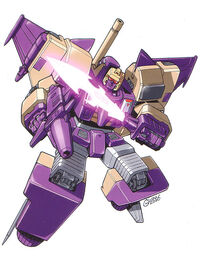 As a Triple Changer, Blitzwing's ability to rapidly transform from tank mode to jet fighter mode makes him one of the most lethally effective Decepticon warriors. Not only are foes confused by his talent, but rarely are they prepared to fight him in a second form after fighting him in the first one. Blitzwing certainly relishes changing form. His favorite tactic is to dive at a target - living or otherwise - as a jet, change at the last moment to a tank, and then smash into the target just as he lands. This hardly ever fails to defeat a foe or amuse Blitzwing. He likes to think of himself as having a sense of humor, although the things that make him laugh are typically cruel and harmful to others. He's loud-mouthed, belligerent and brash - wonderful qualities for a commando, terrible for all those who have to be around him.

As a MIG-25 fighter jet fighter, Blitzwing can fly at Mach 3.2 with a range of 1500 miles. He carries heat-seeking concussion missiles. As a Type-74 assault tank, he can traverse most terrain, however rugged, and can achieve a speed of 33 mph. His track-mounted cannon fires an explosive shell 3.5 miles that can level a 5-story brick building. In robot mode he uses an electron scimitar which can short-circuit any electrical device with a touch of its blade, and a gyro-blaster rifle, which disrupts the sense of balance of anyone it hits for 30 minutes.

Blitzwing sometimes gets his circuits scrambled, which results in him getting stuck in mid-transformation between forms.

Blitzwing arrived on prehistoric Earth during the initial Ark encounter with the Nemesis, but due to staying behind to guard the Nemesis during the Ark invasion, he was not recovered and repaired for almost a year.

For someone as powerful as he is, Blitzwing does not have the best track record when it comes to decision-making. First, he and fellow Triple Changer Astrotrain decided to do away with both Megatron and Starscream and strike out on their own in search of fame, fortune, and energon. While this would normally be considered suicidal, the two Triple Changers somehow pulled it off and were free to finally do whatever it took to wipe out those pesky Autobots once and for all.

The way they chose to do this, however, did not do much to inspire confidence in their abilities. While his partner went off to play with some trains, Blitzwing's personal strategy for victory was to kidnap a football coach under the mistaken impression that the human was some kind of master strategist. Blitzwing brought the Constructicons in on his plan, and used them to build a maze surrounding the entry to his base/stadium. To Blitzwing's credit, a lot of the Autobots crashed into each other, but soon, the Constructicons demanded a share of the leadership, and then Astrotrain arrived. All three were beaten so quickly by Megatron that it was almost embarrassing, and Blitzwing crept carefully back to the Decepticon ranks, hoping that nobody would remember what had happened.

Blitzwing, alongside his "buddy" Astrotrain, would later travel to the castle of Lord Chumley in an attempt to form an alliance with the human. Once there he came across a rather attractive female flesh creature who was crying and tied to a chain. Telling her to "Stop your crying" he then attempted to step on her but found that it was a trap that covered him a rather constructive and "impenetrable" green slime. Astrotrain could not believe how Blitzwing gets into these messes.

Later Blitzwing and Astrotrain were both held captive by Chumley. To add insult to injury, Chumley told them that he would rather have the help of an aardvark than that of a Decepticon. Ouch. Once Optimus Prime was nearly upon Chumley, Chumley asked the two Tripple Changers if he released them if they would fight Optimus for him. They told him to trust them. However they decided it would be more fun to flatten Chumley. Then Blitzwing gave Chumley some good advice, "Never trust Decepticons flesh creature!" Once the Autobots were freed Blitzwing retreated along with Astrotrain, leaving Chumley in an unflattened condition.

Blitzwing was often hanging out at Th' Bar on Cybertron.

"Yeah. Apparently there was an energy signature in the grand canyon or something. By the time I found out about it, Windshear and Thundercracker had flown out of Trypticon, and Starscream screeched at us to get them back. I found it odd though. Thundercracker never leaves his post for any reason, why was this different?

"yeah, I actually used my processor. Wanna make somethin' of it?

"Anyways, the Sweeps beat me to them and I decided to investigate anyways. Scourge is no fun though..... no sense of humor. But apparently Windshear lost of couple of trine-mates some years ago. What's a trine anyways? Beats me. Anyways..... turns out the energy signature was them..... and a freaky large spider that had the screech of a life time......that seemed to be alluring to Seekers, but uhm..... sounded like a songbird compared to the screeching I get from Starscream if I don't tell him how 'pretty' he looks every solar cycle. And it has feelings too! I managed to anger it enough to draw it out of it's cave! I'll spare you all the details though. Then we had a bit of assistance, from someone who decided to punch the thing. Messy stuff.

"However, Thundercracker will be offline for a couple of days while he gets patched up..... and gets the aft washed off of his face. That'll be unpleasant.


Msg: Assigned to do patrol and hit and runs on Autobots in the Ibex area, attempting to pick off isolated enemies and gather intelligence. During run ran into interference from the Wrecker Broadside and another Autobot joining him on the patrol, Dawnfire. With Broadside in pursuit I went to ground to engage the duo. I badly damaged Dawnfire before Broadside transformed to his carrier mode after flying up several hundred meters and let it smash. I retreated at that point.

Partial intel from flight is added to report of sensor logs and pictures, though run was aborted before patrol was finished. Broadside's smashing of the area will likely have inflicted significant seismic damage to the area and the infrastructure and may have slowed their rebuilding of the area down some, as well s left holes in the subterrain that could be exploited by intelligence. Followup patrols are necessary.
... I'm slagging mauled though and going in for repairs.


Msg: Did another patrol sweep of Ibex defensive emplacements taking scans and pictures. While there noticed isolated Autobot engineering team. Went in on an attack run while the defenses in the area were shut down. Present were engineering team (featuring Imager), unknown female Autobot, flying car and heavy cannon colored bright Wheelie not in database (Solstice) and Dust Devil among others.

Engaged the Autobots, inflicted significant damage on the unknown femme. Holograms thrown up by Imager made further scanning difficult, and when the defenses of the area came back online and Autobot reinforcements were en route, disengaged. Reconnaissance and sensor data uploaded to mainframe for Intelligence Analysis.

To: General Report
Subj: Titanium Turnpike Triple Trouble
Msg: Myself and Astrotrain were sent on a raid to hit the Titanium Turnpike to try and inflict as much damage on it as possible. While we did so, an Autobot went on a sensor run -past- a deep space installation (The Space Gate) over which Blast Off was on monitor duty. Astrotrain went to -distract- the Autobot away from the gate to allow it to continue operation uninterrupted while Blast Off remained on sentry duty.


On the ground, Astrotrain and I engaged Dai Atlas and Sludge. We both disengaged after taking minor damage. Dai Atlas is a glitch. He kept on calling out his attacks, said he was a 'Supreme Justice Warrior' and hits like a Guardian drone. Triple changer, has an assault shuttle and drill tank alt mode. Myself and Astrotrain were medevaced out of area upon disengaging.

Blitzwing's face comes onto the viewscreen, rather mauled. "Myself and Smeltdown were patrolling along the Crystalline Highway when we noticed an isolated member of Autobot Command, Elita One. We both went to engage her. She defeated the two of us handily. Smeltdown was crippled and I was buried. After putting up a distress beacon for medevac Deathsaurus and ESmeral came to medevac to base for emergency repairs to Smeltdown and myself. Deathsaurus reported that Elita was not in the area when he was flying over, so it is unknown if she withdrew or continued on her route.

Engaged a pair of Autobots along the Tri-Torus Loop. Tags: Solstice. Upon engaging her the Dinobot Sludge went to reinforce her. I took the worse of the exchange and disengaged back to field base for repairs.


Msg: Overflights noted a series of unusual sky-lights going through the atmosphere. Tracked by satellite to the Mercury Swamps, south along the sonic canyons showed some unusually active plant-life including scans that seemed to indicate some level of active filtration was going around the plant growth. Presuming that it is in fact spreading, it offers potential for improvement in the ecosystem, and perhaps ways to filter impurities and pollution naturally. Myself, Scourge, and Blast Off went to investigate on a flight and encountered an Autobot mini-bot there for the same reason. Nothing of consequence occurred in said interaction.

Msg: Starscream lead a frontal assault upon Protihex, an Autobot occupied region flanking Iacon. Starscream took Predaking and the rest of the attack team into a frontal assault of the city without any actual reconaissance, probing, or attempting any sort of maneuvers. He ordered a bombing run and lead the assault team into an ambush and heavy Autobot resistance thanks to a lack of preparation.

Razorclaw merging his team into Predaking nearly singlehandedly carried the battle despite this, holding off several Autobots and severely damaging Ultra Magnus on his own while taking repeated fire from the defenses and all Autobots.

During said battle Starscream did little to organize our attack force, try and give aid to Predaking or form a defensive screen. The assault team was isolated, picked apart, and forced to withdraw under heavy fire. The day would have been totally lost without the valor of Predaking whom almost singlehandedly won the engagement. Once the attack team was ambushed any attempts at coordination fell until a general withdraw was called for of all forces after heavy damage was taken. All personnel escaped, though all with heavy to critical damage. Damage to the Autobot defenses and infrastrcture is unknown but did not seem excessive, htough the defenders took moderate damage in the process. Given at least from a flyby the defenses seemed intact the Autobots likely will not have to send heavy reinforcements there in the short term.

A more thorough after action report and analysis will follow upon request.


Msg: Was on a patrol along the Tri-Torus Route when saw an Autobot ground vehicle-flier (tag: Solstice). Exchanged weapons fire and then went to point blank range. The Autobot attempted to demonstrate localized munitions supremacy compared to myself and was left wanting. If you got it, flaunt it. After putting her in her place with showing I got more /and/ better ones, I marred her finish with something for psychological warfare and she ran off screaming.

Attached is a picture of Solstice, Autobot redshirt, with a Starfleet Security symbol carved into her torso.

Blitzwing is available for application. He was temped by Silverbolt until 2013.