Blast-Off is a Decepticon Space Warrior. For the G.I. Joe character see Blast-Off. 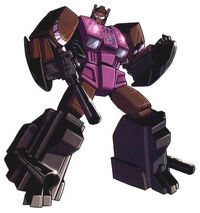 Blast Off doesn't need a write-up in some pathetic, grubby little human database. It might matter to some robots what others think of them, or if they think of them at all, but Blast Off couldn't care less. No, he's literally and figuratively above your average Cybertronian riff-raff. The other Combaticons could completely forget he's up here, orbiting so far above the Earth, distant and alone... with only the cold, empty void for company... and he couldn't care less. No, certainly not.

Lesser robots could hardly understand the joy... yes, that's it, the joy, he finds in efficiently and remorselessly annihilating targets from such a great distance. Blast Off was quite simply "built better" than the rest, you see, and so needs nothing from those tiny beings moving about so... so very... far away below. Blast Off... Blast Off is quite happy with his superior position, yes, quite happy and... and quite alone.

Blast Off condescends to combine with his fellow Combaticons to form Bruticus.

Blast Off was originally forged in Altihex.

Blast Off was one of several Decepticon political prisoners who were "liberated" by Starscream. Somehow he turned from the chassis of a World War II bomber to a Space Shuttle once he was activated. He would probably place this on him being a sophisticated Transformer.

Unfortunately, Blast Off's new body lacked an energy absorber, an "oversight" Starscream used to control him and his fellow Combaticons. In return for the vital components (taken from captured Transformers), Blast Off helped Starscream lead his latest coup against Megatron. The coup almost succeeded, until the Stunticons interfered, leading to Blast Off's (and the rest of the brigade's) exile on a distant asteroid.

His exile would prove to be short-lived. With Blast Off providing the locomotion, the Combaticons returned to Cybertron, where they defeated Shockwave and his drone army. It took a temporary Autobot-Decepticon alliance to defeat the Combaticons, and the Autobots believed them destroyed after Cybertron's sort-of liberation. In reality, Megatron had Bruticus (and thus, Blast Off, we guess) reprogrammed to be more loyal.

Blast Off once left Swindle on the moon out of sheer annoyance.

On Labor Day, 2013, Blast Off took part in destroying the LA Quintesson Spiral from within.

In 2021, Blast Off was assigned to guard construction of a Decepticon Warp Gate.

Blast Off is from Altihex.

He is a sophisticated mech, therefore he is quite the enerwine connoisseur. Anything cultured and classy! He may be a fierce Combaticon warrior, but he has *taste* and it's important to him that this is recognized!

This Blast Off, being a shuttle, is also quite large, towering over most of his teammates.

taken his revenge. The destruction has fed back through the Space Bridge network, destroying all the Spirals, save for the Bellum. Cut off from their allies, the Quintessons mount a fierce defense against Earth's last assault against them.

under Megatron's control, and Blast Off gets a response regarding an offered favour,

>*A brief audio message can be heard as Blast Off speaks*< "Roadkill and I conducted a patrol in the Manganese Mountains today. We encountered Hot Rod running roughshod over the terrain as if he owned the place. We quickly disillusioned him of that idea and sent him packing, sans several key parts of his anatomy. Blast Off out." *audio ends*

Blockade and I were on patrol duty, protecting sector *coordinates given* from Autobot interference. Encountered Autobots Hot Rod and ...some flying car thing-a-ma-bob...thingy. *ahem* We sent them on their way. Blockade, when he *actually pays attention*, did some decent shooting at the end, to my surprise. That's all. Nothing else to say. At all.

>*mutters something about... 'Now excuse me while I get to the shooting range, that was *unacceptable, I will NOT miss again....*'<

>*Blast Off appears onscreen, clears his throat, twitches a tailfin, and then straightens himself up and speaks with his usual snootiness*<

"Several troops of Decepticons, led by our great leader, Megatron, surged into space this fine eve to prevent Calyhex, a Titan, from escaping the planet. The Autobots, the miserable hooligans that they are, were of course there to throw a wrench into that work. We met them with ample aplomb, especially me, and were staving off our foes when, unfortunately, the warship and the Autobot's started heading towards the space warp gate."

"Now I, the loyal and fearless Decepticon that I am, immediately rushed to our great and powerful leader's rescue, but I was, alas, just a fraction of a second too late. I arrived just in time to see Optimus Prime throw Megatron into the void. Where Megatron is now, I do not know, but I realized if I got lost into that same void and ended up who knows where then, well, I'd be *totally* unable and unavailable to help search for him, now wouldn't I? Why, I would indeed. That just wouldn't do. So you can see, it is totally NOT my fault. *ahem*

Blast Off's violet optics flicker once or twice and he rolls his shoulders back, maintaining an aloof and regal state. Or trying to. He clasps black hands together and draws in a vent. "And that's... that. Apparently... Starscream *there's just a *hint* of disdain somewhat masked in there* is now our leader until Megatron returns. Which... I'm sure he will. It'll be fine. FINE. Yes. Oh, and of course, you know, if there's a need for leadership, Onslaught and the Combaticons would be happy to help."

>*he nods to the camera, fingers fidgeting, then turns to turn it off*<

Blast Off can be seen standing in a cargo bay even bigger than he is, expression mostly aloof as usual, but slightly worn by fatigue, and perhaps something else. "As ordered, I went up into orbit after the strike on Ultrix with the Autobot, Starlock, to see if we could find what happened and who attacked Ultrix. Who attacked US. We did not find any direct or immediate answers, but did encounter Movor, who had been patrolling in the area, and who was disoriented and in need of assistance, which we provided. He also provided this firsthand report. Please ignore the questionable taste in music and focus on the burst of light, which... might have been some sort of small ship?" He pauses to hit play on the recording, which then fills the screen.

HEAR THE TWILIGHT CALLIN', AS THE FLAMES BURST INTO THE NIGHT, IT'S CREEPING IN YOUR BLOODSTREAM, LIKE A METAL DISEASE

There is a flash-fire, and it -looks- like it was from orbit based on the angle but it could've been in the upper atmosphere too. There is something, that almost looks like a ship - small, a glimpse of orange - but then there is a titanic blast, and the craft of whatever it was is gone. The music continues, "UNDERNEATH THE STREETLIGHTS, EVERYTHING IS LARGER THAN LIFE"...

The recording continues for a short while afterwards, some of the warnings from planetside coming through, then stops.

Shattered Glass Blast Off is probably a very humble 'bot.

In Bot World, Blast Off, like the rest of the Combaticons, has allied himself with Starscream.

electrawoman played Blast Off in 2004.

Blast Off was later played by Drake Fenwick, and is now played by Boff.