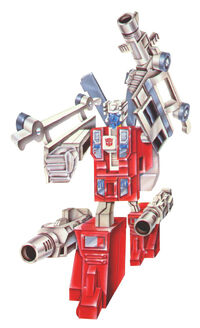 Underneath Blades' aerodynamically designed steel skin beats the engine of your basic street fighter. He would much prefer using his rotor assembly to slash through a horde of Decepticons than to fly. But his function keeps him in the air most of the time, and that really fires his fuel. Not only is he prevented from engaging his enemies in hand-to-hand combat, but he can only strike at them by long-range air attack, a way he considers unsporting and cowardly. "If I'm gonna destroy someone, I want his fuel spurting all over me, not the ground below," says Blades. But this doesn't preclude Blades from doing his job and doing it well, a fact of which his fellow Protectobots are deeply appreciative.

Blades can reach speeds of 400 mph and has a range of 1,200 miles in helicopter form. He carries twin rocket launchers that fire armor-piercing "smart" rockets, each of which seeks its target based on a computer image encoded within it. In robot mode, he carries a photon pistol that shoots light-bursts with the equivalent brightness of 5,000 watt light bulbs, enough to temporarily blind all but those whose optical sensors are the most heavily shielded. He combines with his fellow Protectobots to form the giant robot known as Defensor.

In Bell UH-1V Iroquois helicopter mode, Blades is ineffective in winds of more than 40 mph, and is liable to crash in winds of more than 60 mph. His rotor blades are prone to metal stress fractures if not checked after every 5,000 miles of usage. Blades' preference for hand-to-hand combat often leads him to make decisions based on thrill rather than tactical expediency.

When the Insecticons attacked an inhabited city on Earth, Optimus Prime called upon the Protectobots to evacuate the civilians caught in the crossfire. Later, as Earth's orbit was diverted to the Sun by the Combaticons, while Inferno and Red Alert fought the flames, Blades saved civilians trapped by the fires. Soon afterwards he was spraying his limited supply of coolant onto the flames, but was concerned that he was running out and couldn't cool down the whole planet.

Blades, as part of Defensor, totally blew up Bruticus. Afterwards, he was with the Protectobots when they arrived ostensibly to save some window-washers from a burning skyscraper. Blades actually blew the workers from their dangling platform. Fortunately, Streetwise managed to catch them below. Later still, Blades and the other Protectobots were ordered to help defend Autobot Headquarters from a Decepticon attack. They merged into Defensor and activated his useless force field, which almost immediately deactivated, allowing the Decepticons to blast Defensor back into his component parts.

In the Shattered Glass universe, Blades is a Secret Police interrogator. He loves his work, and is just as like to use his blades to carve up a suspecting Autobot traitor as he is to use them to fly or attack the Decepticons. A coward in battle, Blades prefers to rocket down his enemies from afar and only approach to torture them once they are helpless, injured, and weak.