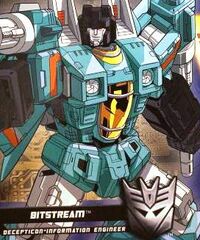 BITSTREAM is a technology genius, skilled in data hacking and cyber warfare. He was one of the first Decepticons to crack Autobot encryption codes, leading the Decepticons to a decisive victory in the “Tarn Valley Ambush.”

In robot mode, BITSTREAM carries a laser rifle to supplement the Seeker lasers mounted on his arms, and with a touch can access almost any non-Transformer computer systems, including advanced semi-sentient systems like Teletraan 1. In F-15C jet mode, BITSTREAM can break Mach 2.5 in High altitudes. He is armed with an M61 Vulcan 6-barreled gatling cannon, as well as a plethora of missiles and bombs. In this mode he is an all-weather tactical fighter capable of creating ionic acid rain storms in planetary atmospheres.

Occasionally BITSTREAM becomes so engrossed in the virtual world that he can mistake it for reality. More than once his Cybertronic brainwaves have had to be forcefully removed from the cyber world, so that he could deal with more physical threats.

Bitstream was one of the Decepticon jets on Cybertron four million years ago. He shot at the Autobots Wheeljack and Bumblebee when they came near, but the Autobots managed to escape.

Bitstream was given a Terran altmode in 2013, for mission on Earth.[1] He was initially lost in the Polyhex battle against the Quintessons, but was subsequently found and recovered.

Bitstream is available for application.