This page is for the insane former-Autobot Junkion. For his evil Shattered Glass twin, see Captain Mal-Feasance (SG). 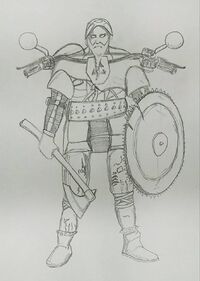 BENJER remembers the original fall of Cybertron, its rebirth, and has now witnessed its slow destruction again. There are some who say this has broken his mind -- others posit his mind wasn't all that together before. In any case, Ben continues the struggle to keep the remaining Junkions alive -- as long as they're not too picky about where he gets his replacement parts. On the battlefield, Ben wields his axe with a skill and detachment of a butcher. Anyone who falls, friend or foe, is an instant donor of new materials. Those who try to stop him may also face his axe - he's not above forcing the issue of organ donation with anybody who dares to cross him.

Benjer is tall for a Junkion, and more stout than most.  Most of his head is covered by a black motorcycle helmet with a cracked silver mask that can be worn down to protect his face or up for increased visibility.  Mismatched optics stare fiercely from a rusted chrome face adorned with a long white-metal beard that hangs down to the middle of his chest.  A motorcycle handlebar protrudes from each shoulder, complete with large round reflective mirrors.

Benjer’s chest is broad and covered in layered brown and orange armour held together with rusted rings and leather straps.  A silver panel in the middle of his chest sports the faded remains of the triangular orange symbol of Junkion.  His powerful arms are made from assembled engine parts – usually one holds an ax while the other carries a spiked shield.  His squat legs are covered with brown vinyl that is dried, split, and patched in several places along their length.  Overall Benjer looks makeshift but rough-and-tumble.

super-extended monkey-style handlebars, one with a Big Wheel pompom hanging out of the end. The seat is covered in brown vinyl looks-like-leather, and the gas-tank is tear-drop-shaped, with an American flag stars-and-stripes paint job, and a Ghost Rider petrol cap. The wheels are extra-large, and sport spiked tires... the exhaust pipes are extra-long and rusted out. This monster machine looks road-worn to the point of near-extinction, and oddly enough seems to be running with no driver.

Benjer was once an Autobot named Beneficience. He was with the original group that fled Cybertron and wound up on the Planet of Junk.

When Tailgate's favorite toaster died, he brought it to Benin-Jeri for repairs. Ben took it to Frank's Junkyard and pretended to repair it, although really he just swapped it out for another, identical toaster. Tailgate, none the wiser, thanked Benin-Jeri and was on his way, thankfully unmindful of Ben using his former pet to patch a hole in the V'ger's armor.

Benin-Jeri has rejoined the Autobots, and encouraged other Junkions to do so as well, including Wreck-Gar. He has been assigned to the Autobot Medical division, and is XO of the Autobot-aligned Junkions.

In 2011 Benin-Jeri traveled to Cybertron in order to give Elita One and Cuffs a ride to assist Alpha Trion. Learning that Alpha Trion had opened the Temple of Knowledge, Benin-Jeri traveled there with Cuffs, spotting ghostly images of Autobots in the Shattered Glass universe (although Ben and Cuffs didn't realize that's what they were) and running into Sunstorm, who they managed to defeat in combat.

Arriving at the Temple of Knowledge, Ben did his best to repair the damaged databanks, hoping to salvage something of the Underbase, or at least learn more about what the Old One found. When Cyclonus discovered Jetfire in the temple and blew off his head, Benin-Jeri saved Jetfire's life, although he couldn't fully repair Jetfire's mind with what materials he had at hand.

When Alpha Trion returned to Iacon in 2013, Ben came with, helping repair Alpha Trion and to build Dust Devil a new body. Since then he mostly sat around and watched TV transmissions from Earth. When a jet flew from the Shattered Glass universe through a portal into Wheeljack's lab, Benin-Jeri and Jetfire took the crashed jet to the examination room to study its origin. There, Benin-Jeri discovered that the jet had a negative polarity on a quantum level, an interesting discovery that may lead to a means to identify Shattered Glass agents on positive-polarity Cybertron and Earth.

When the Decepticons attacked a brewery in the United States, Benin-Jeri responded, getting the V'ger blown out of the sky by the Combaticons in the process. Mild panic began to spread in the US in November as Nightlash engaged Sit-Com and Benin-Jeri, making liberal use of her higher-yield payloads and causing explosions to be heard for miles. In the end, the fight was a draw and Nightlash disengaged, claiming the test-run of her new armament a success.

In 2014 Ben tracked a Decepticon energon shipment to Earth's moon, and engaged Thundercracker while trying to stop the Decepticon shuttle Dictator. After the Decepticons escaped, Ben stayed to try to find where the Decepticons had dropped off their shipment of energon. Cyclonus travelled to Earth's Moon to confront Benin-Jeri, who was snooping around Decepticon operations there. Ben faced off against Cyclonus, first in the V'ger, and then hand-to-hand. Ben held his own for a while, but eventually Cyclonus prevailed. After Dust Devil recovered his battered form, Benin-Jeri fixed up the V'ger and himself and headed back to Autobot City.

Benjer, originally called "Benin-Jeri", was originally a character on the Transformers 2005 MUSH. His theme song is "Who Do You Want To Be Today?" by Oingo Boingo, followed closely by "Television Rules the Nation" by Daft Punk (and maybe "Junktown" by Beats Antique).

and the blind prophet Elita One knows where to find some...