This page is for the heroic Autobot Junkion. For his evil Shattered Glass twin, see Captain Mal-Feasance (SG). 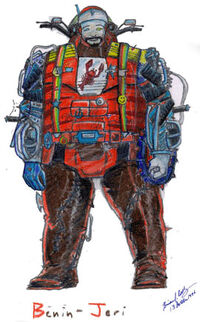 BENIN-JERI is a born explorer, sailing out into the depths of space in search of adventure -- preferably adventure that can be later made into an exciting TV drama. A lot of Benin-Jeri's explorations take place on the couch or his comfy chair on the bridge of the V'ger -- Ben watches TV almost obsessively, and sometimes ignores real-world concerns for what's on the tube. Friendly, outgoing, and a bit clumsy, Benin-Jeri often comes across like a favorite uncle, and has a million stories to tell from his travels. He tends to get his ideas mixed up with the T.V. he's recorded, though, making him a bit difficult to understand. One of the oldest Junkions, he is rumored to predate his race coming to the Planet of Junk, but if this is true, Ben prefers not to talk about it. Preferring adventure to outright violence, Ben has tried to use what influence he has to steer the Junkions away from the Autobot/Decepticon conflict, but wasn't always successful. Eventually he gave in to the realities of the Cybertron war and signed back up with the Autobots under Optimus Prime.

Courageous and smart, Benin-Jeri has a durability that belies his thrown-together appearance. Layers of thick (albeit rusty) armour protects his modulated vitals, and in robot mode Ben supplements this with a large shield as well. In battle Ben can be pretty adept when he needs to be, wielding a replica Federation phaser in one hand, and a Star Wars lightsabre in the other. In motorcycle mode, Ben is a worn-looking Harley Davidson Fat-Boy, with a tear-drop petrol tank and a real-vinyl looks-like-leather seat. It looks like a pile of scrap, barely able to top 75 km/hr, but it usually gets him where he needs to go. It is armed with twin laser cannons (when they're working) as well as retractable tire spikes for rough off-road environments. His travelling ways have left him with a great deal of experience and ability to handle diverse situations (like the Planet of Junk). He tends to be a bit clumsy on land, but he is an ace pilot in space, and a wiz at repairs. Overall, however, Benin-Jeri is built for comfort, not speed, and against a dedicated warrior he can be easily outmatched.

Benin-Jeri talks with his hands, and tends to lose limbs when he isn't careful. Unquenchable wanderlust keeps him from ever settling in one place too long -- soon he's back out on the road, or off in space, always seeking the unseen and unknown. His language is composed of strung-together samples various television shows and movies he's watched, and this often makes him difficult for non-Junkions to understand. Absent-minded to a fault, Ben will often let his mind wander, and sometimes it doesn't return even when its sorely needed. Ben's imagination and tendency to quote star captains make him a bit difficult to converse with, but his warm, friendly nature usually makes up for his somewhat bizarre behaviour.

A roundish collection of spare parts, walking around in a vaguely humanoid shape. His face is cracked chrome with Asian features, including a black metal mustache and neatly-'trimmed' goatee. On the center of his chest is what looks like a silver lobster bib, complete with a stylised depiction of a blood-red crustacean. The robot's limbs are short and stocky, with mismatched red-painted arms, and shiny silver legs, one shorter than the other. His right hand is blue, and his left is white. Rainbow-painted striped bands seem to hold the torso together, and are connected like bracers, complete with happy-face pins. The robot's utility belt holds a variety of weapons, including a blaster pistol modeled after Han Solo's, and an Original Star Trek phaser. A large, round, spiked buckler is attached to the robot's left hip, and is painted orange. The robot's chest is painted with the stars-and-stripes of the American flag, and his helmet has a multicoloured flamejob.

super-extended monkey-style handlebars, one with a Big Wheel pompom hanging out of the end. The seat is covered in brown vinyl looks-like-leather, and the gas-tank is tear-drop-shaped, with an American flag stars-and-stripes paint job, and a Ghost Rider petrol cap. The wheels are extra-large, and sport spiked tires... the exhaust pipes are extra-long and rusted out. This monster machine looks road-worn to the point of near-extinction, and oddly enough seems to be running with no driver.

Benin-Jeri was once an Autobot named Beneficience. He was with the original group that fled Cybertron and wound up on the Planet of Junk.

When Tailgate's favorite toaster died, he brought it to Benin-Jeri for repairs. Ben took it to Frank's Junkyard and pretended to repair it, although really he just swapped it out for another, identical toaster. Tailgate, none the wiser, thanked Benin-Jeri and was on his way, thankfully unmindful of Ben using his former pet to patch a hole in the V'ger's armor.

Benin-Jeri has rejoined the Autobots, and encouraged other Junkions to do so as well, including Wreck-Gar. He has been assigned to the Autobot Medical division, and is XO of the Autobot-aligned Junkions.

In 2011 Benin-Jeri traveled to Cybertron in order to give Elita One and Cuffs a ride to assist Alpha Trion. Learning that Alpha Trion had opened the Temple of Knowledge, Benin-Jeri traveled there with Cuffs, spotting ghostly images of Autobots in the Shattered Glass universe (although Ben and Cuffs didn't realize that's what they were) and running into Sunstorm, who they managed to defeat in combat.

Arriving at the Temple of Knowledge, Ben did his best to repair the damaged databanks, hoping to salvage something of the Underbase, or at least learn more about what the Old One found. When Cyclonus discovered Jetfire in the temple and blew off his head, Benin-Jeri saved Jetfire's life, although he couldn't fully repair Jetfire's mind with what materials he had at hand.

When Alpha Trion returned to Iacon in 2013, Ben came with, helping repair Alpha Trion and to build Dust Devil a new body. Since then he mostly sat around and watched TV transmissions from Earth. When a jet flew from the Shattered Glass universe through a portal into Wheeljack's lab, Benin-Jeri and Jetfire took the crashed jet to the examination room to study its origin. There, Benin-Jeri discovered that the jet had a negative polarity on a quantum level, an interesting discovery that may lead to a means to identify Shattered Glass agents on positive-polarity Cybertron and Earth.

When the Decepticons attacked a brewery in the United States, Benin-Jeri responded, getting the V'ger blown out of the sky by the Combaticons in the process. Mild panic began to spread in the US in November as Nightlash engaged Sit-Com and Benin-Jeri, making liberal use of her higher-yield payloads and causing explosions to be heard for miles. In the end, the fight was a draw and Nightlash disengaged, claiming the test-run of her new armament a success.

In 2014 Ben tracked a Decepticon energon shipment to Earth's moon, and engaged Thundercracker while trying to stop the Decepticon shuttle Dictator. After the Decepticons escaped, Ben stayed to try to find where the Decepticons had dropped off their shipment of energon. Cyclonus travelled to Earth's Moon to confront Benin-Jeri, who was snooping around Decepticon operations there. Ben faced off against Cyclonus, first in the V'ger, and then hand-to-hand. Ben held his own for a while, but eventually Cyclonus prevailed. After Dust Devil recovered his battered form, Benin-Jeri fixed up the V'ger and himself and headed back to Autobot City.

Benin-Jeri was originally a character on the Transformers 2005 MUSH. His theme song is "Who Do You Want To Be Today?" by Oingo Boingo, followed closely by "Television Rules the Nation" by Daft Punk (and maybe "Junktown" by Beats Antique).

In the Autobot World universe, Benin-Jeri is a former maintenance drone pilot who now does menial world for the upper-class Autobots.

In the Decepticon World universe, Benin-Jeri is a grim fighter, and one of a the few Junkions to return to Cybertron and survive.

After 50 years of absorbing Earth culture remotely, in 2005 the Junkions launched a ship, led by Benin-Jeri, to search for the broadcast source of the mysterious all-powerful Sponsor. Arriving on Earth, some Junkions joined G.I. Joe in battling the dark forces of Cobra, while others resisted getting involved. Ben was one of the Junkions who opted to help out, rebuilding himself into the form of a Ninja Lightning Cycle.

After 50 years of absorbing Earth culture remotely, in 2005 the Junkions launched a ship, led by Benin-Jeri, to search for the broadcast source of the mysterious all-powerful Sponsor. Arriving on Earth, some Junkions assisted G.I. Joe in reviving Autobots and Decepticons from the Ark, while others resisted getting involved. Ben was one of the Junkions who opted to help out, rebuilding himself into the form of a Ninja Lightning Cycle.

In the Shattered Glass universe, Captain Mal-Feasance is an evil Junkion pirate.