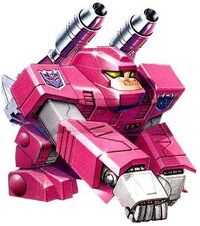 Like the apes he resembles, Beastbox is naturally curious, which should, in theory, make him an excellent interrogator. Unfortunately, that curiosity is subsumed by his impatience and violent rages. Although he can record up to 6000 hours of testimony, he rarely captures anything but screams and cries as he pummels his recalcitrant captives with his heavy metal fists. Although a violent attitude is a must with the Decepticons, his superiors are rather displeased with his performance -- it's difficult to gain information from an Autobot after he's been beaten to death.

He can combine with Squawktalk to form Squawkbox.

On the MUX, Beastbox and Squawktalk were built on Earth by Soundwave in 1988.

Beastbox hasn't been introduced yet on the MUX, but he can be assumed to be hanging out with Soundwave's other tapes.

Beastbox is available for application.