Beachcomber is an evil Autobot from the "Shattered Glass". For his heroic counterpart, see Beachcomber. 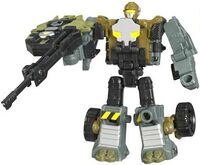 Beachcomber is a twitchy, nervous, unstable evil Autobot dune buggy who is considered completely insane even by Autobot standards of sanity. Deep down he knows that there is no true escape, no matter how far he travels into the desert.

In vehicular mode, Beachcomber has a range of 800 miles and is capable of traveling over very rugged terrain. He's equipped with various magnetic, ionic, electrostatic, infrared, and sonic sensors, among others, which enable him to accurately determine the chemical composition of any terrain he visits. He uses this ability to locate vital resources for the Autobots, as well as to hunt down victims of his latest "sport." In robot form, he has an unusually high agility, which makes him a skillful hunter. In both modes he carries a powerful stun cannon he uses to take victims alive for his various "games," usually played with a variety of geological hammers and hooks.

Extreme insanity interferes with Beachcomber's performance, and most Autobots are either afraid or too creeped out to work with him. While he's neither too strong as a robot nor too fast as a vehicle, he makes up for his shortcomings with sheer manic aggression.

"Cats in the cradle! And the silver spoon! Now's your time to burn your mind!"

Beachcomber was locked in an insane asylum for vorns before the outbreak of the war, suspected in a string of particularly gruesome serial murders. Released by Emperor Prime's forces, Beachcomber joined up more for the chance to kill and kill again than for any specific interest in Prime's longterm plans.

Beachcomber was onboard the Ark when it traveled to Earth and crashed into the ocean off the United States' west coast. He was amongst the Autobots crying out for death during the battle between Jazz and Jetfire.