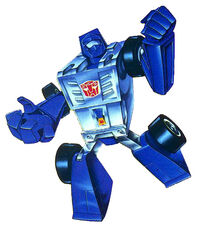 Warfare holds no interest for Beachcomber; he much prefers to take long, lone journeys into the vast expanses of desert wilderness and along the rugged coastal shores that occupy so much of the American landscape. Only in these places of such stark, natural beauty does he feel he can completely escape the conflict between the Autobots and Decepticons. Only in these places can he purge himself of the tensions that sometimes interfere with his operating efficiency, and relax. He's cool-headed, low-key, personable; he's what Earthlings would refer to as "laid back." But despite his feelings to the contrary, he never shirks his responsibility to fight for the Autobot cause when called upon. Deep down he knows that until his side wins there is no true escape, no matter how far he travels into the desert.

In vehicular mode, Beachcomber has a range of 800 miles and is capable of traveling over very rugged terrain. He's equipped with various magnetic, ionic, electrostatic, infrared, and sonic sensors, among others, which enable him to accurately determine the chemical composition of any terrain he visits, and he uses this ability to locate vital resources for the Autobots. In robot form, he has an unusually high agility, which makes him an elusive target.

Mental stress can interfere with Beachcomber's performance, often making him vulnerable in combat situations. He's neither too strong as a robot nor too fast as a vehicle.

Beachcomber arrived on Earth during the initial impact of the Ark into the planet. He had been present when the Ark crashed onto prehistoric Earth during the encounter wih the Nemesis, but due to being in the more heavily-damaged Ark belowdecks, he was not recovered and repaired for almost a year.

Beachcomber showed up out of nowhere one day, helping Hound, Inferno and Bumblebee investigate some Insecticon attacks on an old growth forest. This unit proved to be sufficiently under-powered when it came to confronting freshly fed Insecticons, and their battle strategy amounted to hiding behind Hound's holograms until the bad robots went away.

Beachcomber was next seen on Dinobot Island, worrying that the battle with the Decepticons would destroy the environment before it could be properly studied, but at least he was still fighting while complaining.

Beachcomber, along with the other Autobots, were exiled from Earth after Megatron allied with greedy businessman Shawn Berger to create anti-Autobot propaganda. He and the other Autobots managed to return to Earth thanks to Trailbreaker's force field and Cosmos's navigation.

On a geology expedition with Perceptor and several other Autobots, Beachcomber abandoned them in the middle of a firefight to explore a cave in the nearby cliffside. While his friends were dodging laser fire and trading blows, Beachcomber was learning to speak parakeet and communing with nature. He also found a golden lagoon full of electrum, a naturally-occurring element which would make any Transformer impervious to harm. He dipped his hand into the lagoon, and it turned completely gold in color. Beachcomber hid this information from his fellow Autobots, and even kept his silence after Thrust arrived coated in electrum and drove the Autobots into retreat, capturing two of their number in the process. Valuing the scenic beauty surrounding the electrum pool, Beachcomber still refused to warn his comrades after the entire Decepticon army arrived coated with invincible golden armor. He went solo to check on the lagoon, and was captured by the Decepticons. Some of the dumber Seekers acted as his prison guards at the Decepticon sunken base, though, and Beachcomber managed to escape alongside his fellow prisoners Perceptor and Seaspray.

Reaching the electrum pool, the trio was met by Optimus Prime and the rest of the Autobots, who had independently uncovered the pool's location thanks to Powerglide. Realizing his golden hand would give him away, Beachcomber quickly dove into the electrum to disguise his prior knowledge of the substance. In the final battle with the Decepticons, Megatron ordered the electrum pool destroyed rather than sharing it with the Autobots. In the aftermath of the explosion, the wilderness was totally decimated. Beachcomber never told the Autobots that he had known about the Decepticons' secret weapon and had kept silent, and instead sat around mourning the loss of the grass and trees.

Beachcomber briefly maintained a position at the Autobots' New York City base inside Sparkplug's garage.

He was also seen attending Teletraan I when the Autobots were engaged with the Insecticons and Morphobots.

Beachcomber was next seen protecting San Francisco from an alien bird-dragon unleashed on Earth by the Constructicons. He tried appealing to the creature, thinking that we're all one with the same universe. Yeah... that didn't work well.

When the energy creature called Kremzeek assaulted the Ark, Beachcomber was one of the first Autobots short-circuited by the little creep.

Beachcomber was later kidnapped by a greedy toll booth and forced to drive in a circle while hopping over spike-traps. It might make more sense if we explained it better, but it would be nowhere near as funny.

Next, after Megatron kidnapped Perceptor and then voluntarily let him go, Beachcomber joined the entire Autobot team in riding out a few miles from the base to retrieve their friend. Why several dozen Autobots were needed for such a simple mission... is unknown.

Beachcomber often hangs out with Groove on the MUX.

Beachcomber was @emitted by Spikewitwicky for the Apocalypse World TP.

Retrieved from "https://tfumux.fandom.com/wiki/Beachcomber_(AU)?oldid=73514"
Community content is available under CC-BY-SA unless otherwise noted.