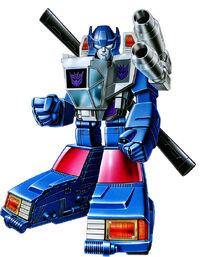 Battletrap can best be described as playful - in the same sense that a cat is playful with a mouse that it's caught before the cat moves in for the kill. If his two components were humans they'd very likely be a wrestling tag-team. He likes to trap an adversary between his jeep and helicopter components and have "fun" with him - knock him back and forth a bit - before finally ripping him to pieces. He's cheerful and good-natured - no doubt because he enjoys his work so much.

Battletrap has good strength in robot mode, but sacrifices much of this for mobility when he divides into his two vehicle modes. Neither vehicle is especially rugged or weapons-fire-resistant.

Megacycles ago, Shockwave selected two decepticons to take part in his experiments with enhancing the cybertronian body and spark. Flywheels and Battletrap were selected for this because to most, they were your standard decepticon troopers, AKA expendable. Shockwave's experiment was successful, he was able to split each of their sparks into new vehicle forms and merge them when they transformed.

While the Earth-based Decepticons slumbered, Venom's Mayhem Attack Squad was active on Cybertron, as an independent force that performed missions for Shockwave on an individual basis, counterpart to the Autobot Wreckers.

Battletrap remains a member of the Mayhem Attack Squad on Cybertron, except when he is needed on Earth.