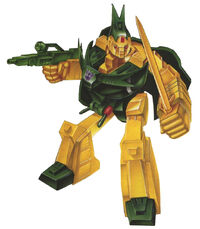 Winning is never enough - this Insecticon's attack continues until the ground is scorched and leveled. He is completely merciless and cruel, stemming from his belief that kindness only stirs hope among the vanquished. Although skilled in tactics and hand-to-hand fighting, Barrage prefers to reign death down from above, enjoying the sight of his ememies fleeing in terror, as well as the pyrotechnics of exploding landscape. If he had his choice, he'd do nothing but level everything in all directions, as nothing gives him more joy than sheer wanton destruction.

In insect mode, Barrage can shoot non-stop explosive charges from gun mounts located on several points along his frame, and high energy photons from his head-mounted antenna. He carries a good deal of ammunition with him everywhere he goes, and can maintain full-auto weaponsfire for quite some time. In this mode he flies up to 15 mph, with a 400 mile range. He has a powerful sonic rifle in robot mode, along with a golden sword he wields with deadly accuracy in combat.

Barrage is unquestioning courageous and devoted to the destruction of his enemies, his brusque nature and single-mindedness of purpose leads him to be disliked by most of his fellow Decepticons. His inability to carry a conversation about anything besides weapon systems and tales of his exploits leave him little opportunity to develop lasting friendships, and his kill-them-all mentality leads to constant instances of 'accidental' friendly fire, especially among non-Insecticon Decepticons. And although his firepower is considerable, he is physically weak and not very fast, leaving him in dire trouble if he is pinned down and abandoned by his comrades. And being virtually totally offensive-minded, Barrage often leaves himself exposed to counterattacks.

Barrage and the Deluxe Insecticons remained on Cybertron during the Lost Years, and didn't transfer to Earth until 1985. Barrage reports to Venom first, and to Shrapnel only in emergencies.

Barrage and the Deluxe Insecticons remain active on Earth under the command of Venom.