This page is for the evil hunter/destroyer Bane. 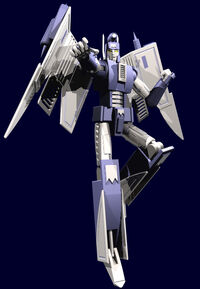 Bane is a fearsome and implacable hunter-destroyer. Unicron created him from the wreckage of dead Decepticons to hunt down and eradicate Autobots and their human allies. He is disturbingly effective as a tracker-terminator, possessing powerful high-tech scanning and locating equipment with which to hunt his prey. He is merciless, and uses an arsenal of weapons, including laser blasters, target-dissolving acid rays, disintegrator beams, and assorted demolition and fusion devices. He can transform to a scouring space-worthy hovercraft capable of handling any terrain when scanning for "survivors." Unfortunately Bane is considered annoying by his fellow Sweeps, and he's unlikely to receive their aid when he gets in over his head.

Bane was created from the wreckage of an unfortunate Decepticon long-range patrol that ran afoul of Unicron. While originally subservient to the Chaos God, since Unicron's destruction he is a free agent, and has thrown his lot in with the Decepticons, gleefully hunting down insurgents on the planet Cybertron.

In 2019, Bane injured his wing and had to report to Trypticon Medical for repairs, where he met Deathsaurus and Goth.

Available as a DC (or as a full FC). Currently temped by Bzero.

Retrieved from "https://tfumux.fandom.com/wiki/Bane?oldid=77806"
Community content is available under CC-BY-SA unless otherwise noted.