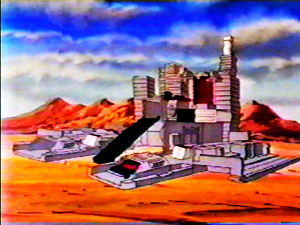 Autobot City is the home base and primary headquarters of the Autobots on Earth. It is currently located in the deserts of Nevada.

Autobot City on Earth is the center of operations for the Autobots, and the primary base following damage done to the Ark. Large enough to house possibly hundreds of Transformers it has laboratories, communications decks, command centers, and meeting rooms. It also has the ability to transform into a heavily armored fortress capable of holding off a sustained full-force Decepticon attack for over 24 hours. A smaller sub-section of the city can transform into the giant Autobot warrior, Metroplex. [1]

"Autobot City looks like a federal energy project gone mad. Here, the Autobots are trying to exploit every known means of getting energy. The mountain is covered with solar panels, windmills spin in the valley, oil derricks pump, and not far away a hydroelectric dam catches millions of volts. Near all of these various things are energon compressors, which turn the raw energy into energon cubes.

IN THE BACKGROUND of these scenes, we should see various panel truck-type Autobots cruise up in auto mode to stacks of this energon, convert to humanoid mode, load up their vans, then convert to Auto mode again and drive the Energon into Autobot City.

In short, it should be clear that the purpose of Autobot City is to harvest energy." [2]

The "Crows Nest" is the Autobot communications hub in Autobot City. It has windows all around and Blaster's seat rotates so he can watch action and broadcast battle reports like a Top 40 Deejay.[3]

Built by Grapple and Wheeljack in 1986, Autobot City was originally located near Lookout Mountain, in the Alabama, Georgia, and Tennessee tri-state area.

Autobot City has been moved several times. It is currently located in the Nevada Desert, away from human settlements, where it collects geothermal and solar energy to limit the Autobots' reliance on fossil fuels. In 2009, Optimus Prime proposed moving it back to Lookout Mountain so the Autobots can have a more centrally-located base of operation. However, the opening of a rift in Wheeljack's lab prevented the city from being moved or from even transforming, a tactical weakness that, luckily for the Autobots, was never discovered or exploited by the Decepticons.

In 2014, Metroplex was infected by the Arkeville virus, and Autobot City was taken over by the Decepticons. Ghost possessed his automatic systems, taking control of the entire city. In November of that year he was finally freed of the virus's effects and Ghost's possession, but what lingering effects Metroplex will face from the ordeal are not yet fully understood.

When the location of the Pit VII became known to Cobra, putting Nebraska civilians in danger from another full-on attack, the Autobots temporarily sheltered G.I. Joe in Autobot City until Pit III was reactivated.

When in defense mode, Autobot City is armed with numerous laser cannons, missile launchers and double blast doors to keep Decepticon invaders out.

Even in city mode, Autobot City is well-armed, although the buildings are more vulnerable to aerial strikes.