View source
This article is about the evil Decepticon transport - for his heroic Shattered Glass counterpart, see Astrotrain (SG). 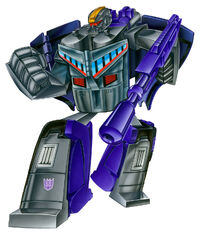 Creating confusion is ASTROTRAIN's specialty. As a triple changer he can switch from robot to locomotive train to space shuttle almost instantaneously, leaving unsuspecting enemies perplexed and vulnerable. It's for that panic and fear that he instills in his opponents that Astrotrain lives. In his shuttle mode is capable of interstellar flight, with a maximum speed of 50,000 mph, as well as possessing an FTL drive; as a JNR Class C62 steam locomotive he can reach 400 mph, with a range of approximately 1700 miles. When in his robot mode, his weapons are his great strength and his ionic displacer rifle, which disintegrates by disrupting the molecular bonds of its target. He often suffers failures in his long range communications array and mechanical breakdowns in his locomotive wheel assemblies.

Astrotrain arrived on Earth during the second year of Megatron's campaign to conquer the planet and its energy resources. Prior to that Astrotrain was a transport officer in service to Shockwave.

He once transported Megatron to the Moon where he and the Decepticons' leader attempted to jam Earth's radio waves. The attempt was interrupted by the arrival of Omega Supreme, two humans and Optimus Prime. Astrotrain engaged in a bad pun, accused Omega Supreme of being too outdated to catch him, and then was the victim of a Cybertronian's impression of a sandworm before being thrown a few planetary diameters.

Typically one of the more easy-going among the Decepticons, even Astrotrain isn't above letting a little power go to his head. While tracking Cosmos, he shot down the Autobot, who had been on a fuel scouting mission, and managed to trick the people of Titan into believing that he was one of their Sky Gods, so that they would mine energy crystals for him and the Decepticons. Astrotrain used Jero, a corrupt High Priest who was as fanatical as he was ruthless, to further his ends. However, the Autobots Jazz and Perceptor arrived aboard Omega Supreme looking for Cosmos. Omega Supreme was virtually out of fuel after the trip, but the Autobots soon managed to refuel him using the energy crystals. Knowing that he, Starscream and Thrust alone couldn't beat Omega Supreme, Astrotrain destroyed the crystals in a fit of pique before flying off, leaving Jero to die like the worm he was. Harsh, Astrotrain, harsh.

Astrotrain later transported Ramjet and Dirge to the planet Monacus to check up on Decepticon sympathizer Lord Gyconi. When they learned that Gyconi had captured a number of Autobots and brainwashed them into mindless slaves, the Decepticons tried to stow them aboard Astrotrain to take them back to Megatron. However, their plan was stopped by Smokescreen, Devcon and Sleezardo, and the latter two followed Astrotrain into space as he escaped with his comrades.

However, the incident on Titan had given Astrotrain a taste of power, and he decided he liked it. With the help of Blitzwing, Astrotrain froze Megatron and Starscream in a sewer system in order to take over the Decepticons. He then created an army of trains to help him rule, thinking it was a good idea. Although he managed to amass a surprisingly large amount of energon cubes, the productive day ended with him flooding the entire city after bursting a water main. Worse, Megatron thawed out. The embarrassment of these incidents forced Astrotrain to creep back into the Decepticon ranks quietly... at fusion cannon point.

Astrotrain transported Megatron, Starscream and Rumble to the lost Autobot colony of Antilla, where they discovered the entire civilization had been wiped out by the deadly Cosmic Rust. Not heeding a holographic warning from the Autobots, Megatron ventured further into the colony and seized an advanced heat ray weapon from its storage chamber. As they left Antilla, a Cosmic Rust spore-filled asteroid appeared to chase after Astrotrain, prompting Megatron to test out of the power of the 'lightning bug' weapon on the space rock. The blast obliterated the asteroid, but the shrapnel from the explosion pierced Astrotrain's hull and punctured Megatron's chest plate, infecting him with Cosmic Rust. Oddly enough, Astrotrain was never infected.

In 2007, Astrotrain was promoted to Wing Commander and for Stellar cycles was CO of Cybertron's Space forces, assigned to the Air Combat Support Group.

In 2020, Astrotrain was made Aerospace XO by Valour.

ASTROTRAIN loves to explain things. A lifelong educator and astronomer, ASTROTRAIN joined the war to stop Emperor Prime’s excesses, but has never lost his calm, intelligent demeanor. He acts as a soothing presence to the Decepticon troops, and years for the conflict to end so he can use his new alternative forms to explore the universe in peace.

In his shuttle mode is capable of interstellar flight, with a maximum speed of 50,000 mph, as well as possessing an FTL drive; as a locomotive he can reach 400 mph, with a range of approximately 1700 miles. When in his robot mode, his weapons are his great strength and his ionic displacer rifle, which disintegrates by disrupting the molecular bonds of its target. He often suffers failures in his long range communications array and mechanical breakdowns in his locomotive wheel assemblies. Also, sometimes his lecturing bores those Autobots with short attention spans.

In at least one alternate future, Astrotrain becomes leader of the Decepticons, and successfully crushes the Autobots after Megatron and Optimus Prime kill each other in combat. Hubcap becomes leader of the Autobots when times are grim and someone a little less noble and a little more willing to scavenge is needed to carry the light of the Autobots. He's a product of a very NASTY future where a lot of TFs are dead. He didn't jump at the call - the call jumped at him, when he found the matrix from Op's fallen dead body laying on the ground. Hubcap has to /be/ the hero though in that universe, to fix it all and save everything, or Astrotrain and his remaining decepticon army will ravage the bots.