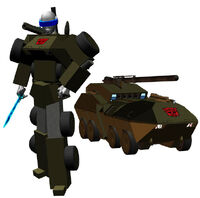 ARX was originally a Decepticon slave, but was freed from this life during a raid led by Optimus Prime. Rebuilt and refitted with an Earth-based altmode, he's since become an Autobot as dedicated to their cause as any other. He is highly loyal to the Autobot commanders and highly values honor, practicing a strict moral code. In robot mode, he wields a fearsome energy sword, while in his Stryker Mobile Gun System mode, his primary weapon is a 105 mm tank gun. A robot of phenomenal strength and limitless tenacity, Arx battles unceasingly against his former masters.

Arx was originally used as a slave drone, working in a Decepticon energy processing plant. This life of monotony began some time before the Ark's fateful journey to Earth. In a chance raid on the plant, led by Optimus Prime, then-drone Arx was inadvertently taken back to Iacon, thought inert, and designated to be used for spare parts. He was subsequently packed away aboard the Ark, in several pieces, and it wasn't until 1987 that he was discovered by Wheeljack, who put him back together out of curiosity. Over the next year, Arx was slightly reconstructed, giving him the Terran altmode of a HumVee. He was originally christened "Hummer."

Hummer began communicating heavily with Teletraan One at this point, learning strategy starting with chess, then moving on to data about past Autobot and Decepticon campaigns. As contact with humans increased, Hummer began studying Earth history and culture. He developed a particular fascination with Europe's legends of knighthood and chivalry, which led him to study swordsmanship. Hummer's personality began to develop further under these influences, and soon enough he pledged his own chivalric oath of sorts to the Autobot cause, formally joining their ranks.

Hummer was eventually placed in the Special Ops division of the Autobot forces, assigned to the Wreckers in 2006. He served quietly as a member of the rank and file for a number of years, until in 2009 he rather abruptly broke his previously usual behavior patterns. Having gone to assist Superion in battling the Decepticons, Hummer found the gestalt defeated and Megatron controlling the field. Hummer challenged Megatron to a duel and was killed in the encounter.

Hummer was eventually rebuilt and resurrected by Alpha Trion, and took the new designation Arx.

"I started my first MUD in mid-1996 and joined TF2k5 in summer of 1997. At the time, I had very little notion of what the heck I was doing. I like to think I've come along a bit since then. I've played scores of characters over the years on dozens of games, staffed all over the place, and served as game director for several of my own MUXes. Here on TFU, I served as the game's first Optimus Prime. I've been away for a long time but hey... it's never too late to make a comeback right?"

"Lugnut, here. I've... got a bit of a mystery on my hands, here. When the Aerialbots were brought in from the field after Megatron damaged them, we also picked up a bunch of... parts. After a few scans, I determined these to be the remains of Infantry member Hummer, assigned to the Special Ops department. It looks like he was in that same attack, but I haven't heard how he got there or what, exactly, he was doing there. Records show he called for a medical evac from that vicinity, but no other reports were filed. Then he went and, well... got himself killed. I'll see if Wheeljack can salvage his core, but... there's not a lot left. Anyone who can provide information about this, please submit an additional report. Autobots should not just turn up mysteriously dead, without explanation."

Seeming frustrated, the medic clicks off the data recorder, the screen fading to the Autobot medical division logo.