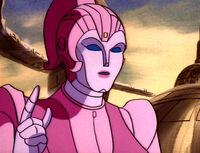 ARIEL is a dockworker and freedom fighter.

11 million years ago, during the First Cybertronian War of Cybertron, there lived a robot named Ariel, a dockworker with a boyfriend called Orion Pax. She had heard stories that the new "flying robots" that Orion and their friend Dion admired had put together an army and attacked one of Quintesson's outer cities, but Dion laughingly dismissed her as gullible while Orion remarked that they had Guardian robots to deal them, so that it wasn't of their concern.

Ariel eventually teamed up with the flying robots as part of the Autobot resistance.

Retrieved from "https://tfumux.fandom.com/wiki/Ariel_(QW)?oldid=70784"
Community content is available under CC-BY-SA unless otherwise noted.