View source
watch 01:25
Jurassic World: Dominion Dominates Fandom Wikis - The Loop
Do you like this video?
Play Sound
The name or term Arcee refers to more than one character or idea. For a list of other meanings, see Arcee (disambiguation). 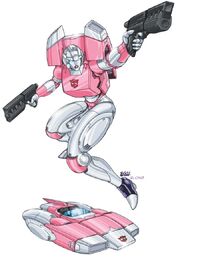 A generous and loyal Autobot to her friends, ARCEE is also a merciless, lethal warrior to her enemies. Arcee's intelligence, quick wit, and coolness under fire make her invaluable to the Autobot cause. The Decepticons sometimes underrate her because they believe she is beneath their consideration. It is an attitude that Arcee exploits with deadly efficiency. Arcee is very protective of humans, considering them long-time friends of the Autobots. In fact, sometimes Arcee is a bit overly protective of humans and treats them almost like fragile Ming vases since their skin is not composed of a supremely tough metal alloy like hers. Arcee is friendly with the larger Autobot warriors, although if one were to only listen to the verbal pot-shots they take at each other, one would think that they were the bitterest of enemies. But catch one of the Decepticons making a disparaging remark about her friends, or worse, threatening them in Arcee's presence, and the offender will more often than not find his hydraulic hoses sliced to ribbons before he knows it.

In robot mode, Arcee carries a heavy laser pistol, an electrical disperser and an electro-saber, all of which she uses with incredible proficiency. In convertible mode she is blazingly fast, extremely maneuverable, and makes use of wheel-mounted blades and a hood-mounted laser turret. Arcee's concern for humans sometimes causes her to take excessive risks in order to protect them, but in more cases than not she is more than capable of taking care of herself and them.

During the Lost Years, Arcee was one of Elita One's Female Autobots, although she often worked off-world or closely with Ultra Magnus as a liaison when on Cybertron.

Arcee splits her time between working for Elita One on Cybertron and Ultra Magnus on Earth. She is currently assigned to Autobot City. In 2014 she helped stage a daring rescue of Benin-Jeri and his medical staff from Decepticon-occupied Autobot City's repair bay.

In 2015 she was part of the crew on the ill-fated maiden voyage of the Spirit of Freedom.

In 2016, Kup, Wheelie, Arcee, Sit-Com, and Phase-Ar travelled to Goo, where they discovered the tracking station had been destroyed by death crystals. The Autobots and Junkions were attacked by Astrotrain, revealing the Decepticons had the crystals now. Kup revealed foreknowledge of the crystals, and explained he’d encountered them before, and had been held prisoner on the source world, Dread. Arcee, Elita One, Kup, Optimus Prime, and Swish travelled to Dread, where they destroyed Megatron's death crystal cannon and freed the Dread Slaves, cutting off the Decepticons' source of death crystals.

While on patrol in the Southeastern United States (gives more precise coordinates in a map attachment), I kept getting 'ghost signals' on my scanner that hinted at Decepticon activity; however, I wasn't able to get a precise lock on them or even an identifiable scan. I followed these signals on the freeway until they got stronger, then I exited the freeway and continued on a two-lane highway into a rural area.

It was at this time that the signals grew much stronger, and I was met by three Decepticons. One of them was definitely Slugfest. The other one I'd never met... (gives description of Windshear) And the third was a Sweep. The Sweep decided that he was going to 'take' me, as if I were some kind of possession...I shot him a few times but he managed to dodge most of the shots, unfortunately, so I called for backup.

Right as Hot Rod arrived, a *second* Sweep uncloaked and hit him in the back of the head. This second Sweep was different in that he seemed to have 'rank' over the Sweep that attacked me... (she describes Sweep #2, Revenant). We were outnumbered and outgunned, but remained silent as Sweep #2 seemed to think we were 'beneath' their consideration. Then, they departed. Hot Rod was slightly injured in his encounter with both Sweeps, but otherwise we got out of there alright.

Speculation: The Decepticons may have a project in this vicinity. The 'ghost signals' I was picking up explains the presence of the Sweeps, who tend to evade normal scanners with their cloaking capabilities. What they're looking for is unclear, but this area was away from the main highways and cities. Please exercise caution when patrolling this area.

Arcee here. I spent this week out in the field, at a fracking site in central Pennsylvania which is in the fly-zone of common Decepticon route patterns. I decided to just sit and observe the well site, just to see whether Decepticons were using these wells as makeshift fueling stations. Here's what I found.

The site itself is in a forested area, but still easily accessible to Cybertronians of average vehicular size and robot modes. While I was there, three Decepticons showed up at various times. The first one to show up was Starscream. I wasn't even going to engage him in battle over what amounted to a massive pile of filthy fuel, so I let him take whatever he wanted. I don't even think he took very much, it was just too dirty and gritty for immediate use. Intel, please note: He was complaining about having been ordered to check out this site. So apparently, someone is giving Starscream orders these days. Very interesting...

On the following evening, I encountered Windshear and Slugfest. The little tape was pitching a fit at me for...uh...I can't really remember now, I just remember he was kicking me a lot. And then there was Windshear. Is he some kind of Intel officer, does anyone know? I couldn't figure him out. Things got a bit tense, but he 'refused' to fight me, and wouldn't give a reason. I'm not sure what that was about.

Conclusion: Three different Decepticons checked on this single fracking site. The fuel generated by these operations is very crude, heavy, filled with groundwater particulates and petrochemicals that could potentially be harmful to Cybertronians without additional refinement. But it does seem as if the Deceptions do 'treat themselves' to productive wells quite often. What this means for human workers on fracking job sites...companies that run these operations, and others, is clear: there isn't nearly enough security available to deal with this widespread theft, and it may become our duty to protect these wells if the word gets out.

(( Arcee appears on-screen. It's somewhat dark where she is, and it's kind of difficult to discern where she is, but she appears to be in a room that is not part of any recognizable room within Metroplex. When she speaks, her voice is in hushed tones. ))

"Autobots, I'm...I'm terribly sorry, but I think I've really screwed up this time. It wasn't my intention to do so. Listen...for the safety of the base and the integrity of Teletraan, change the passcodes and frequencies as soon as possible. When I'm done with this message, I'm destroying my commlink. I don't want a single Autobot harmed because of my actions. I have to...get on with things. Such as they are. Oh Primus. What have I done...this is unforgivable. Please, give my love to Daniel, and...and Spike, and Hot Rod and Springer, and...I love you all, I'll never forget you. I'm afraid this is...good bye!"

A group of Decepticons goes back to the Bruce Power Plant and find Autobots in defense of the humans repairing the plant.

"Teletraan reported problems at the Beijing Airport. I arrived to find...this femme << transmits picture of Illarion >> tearing the place up and causing huge amounts of property damage. Thankfully, not a single person was injured or killed, although most of the airport itself is in total shambles as...things got broken when I tried to stop her. But property can be restored, so I'm calling this one a win. Eventually, she grew tired of causing problems and left the area voluntarily, but wow, what a mess she left behind. Arcee out."

<< Arcee is in vehicular mode, and her surroundings are being captured by internal camera feed sent directly to Teletraan. The camera turns to focus on a human male in her front seat. He's a Caucasian man in his 50's, dressed in jungle camos. He's covered most of Arcee in twigs, leaves, bark, and camo paint to blend into the jungle environment. >>

"Greetings, Autobots, my name is Dr. Alan Goldstein, I'm an archeologist and visiting fellow at the University of Oregon's Earth Sciences Department. Arcee asked me to come with her to the Amazon rainforest in Brazil, to assist her with tracking and observing 'Snarl' and 'Slugfest', two of your kind who have apparently been affected by a virus that regresses the mindset to a more primitive state. I was able to obtain permission from the local indigenous tribe to stake out an observation point in which to watch the two infected Cybertronians from a distance."

"With Arcee's assistance, the two of us have obtained significant amounts of observable behavior from both Snarl and Slugfest which demonstrate a number of things. Firstly, they have allied and regressed to the point of behaving much like animals. No verbal communication has been observed from them. Arcee and I observed them going through the motions of foresting for jungle fruit, even going so far as to nap following their 'meal'. Arcee informs me that it's only a matter of time before they both run out of energon, but neither Arcee nor myself have any way of knowing if any locals are in serious danger. We are in a remote location, but even so, there are tribes in this area, as well as logging activity. All footage from my own camera as well as Arcee's will be sent to the Autobot computer...'Teletraan', I believe? Yes."

"Anyhow, since we are in hiding and since Arcee's in vehicular mode in case we need to make a hasty retreat, she is allowing me the honor of filing this report. Two of your infected kind are here, however we have no safe way of retrieving them. We will make our observations, file them to Teletraan, then depart in the morning. This has been Dr. Goldstein, reporting for Arcee, and it has been an honor to do so. Stay well, Autobots."

<< The camera powers down, but following this report is extensive footage of Slugfest and Snarl in their dino-modes, snarling at monkeys and eating fruit like a couple of mooks. >>

(( Arcee appears at her station in the Iacon Command Center. The place is dimly lit, with a lot of red-hued warning readouts, and all monitors are currently in use, including the secondary and tertiary arrays. Clearly, an emergency situation is underway. ))

"Attention all technicians and scientists, we are facing a potentially serious situation. A group of us went down into Silent Grill to see if we could confront Dal Matia and her cultists...we didn't find them, but we came across something even worse. Ironhide, Typhoon, Jetfire...you were there as well, you can confirm this wasn't some sort of hallucination."

"Apparently, while exploring Silent Grill, we inadvertantly activated some sort of...pumping system, behind a sealed chamber. We came across a vast, vast sea of dead energon. And the moment we found it, this pumping mechanism activated and began to pump the dead energon straight into the planet. We...we need answers. We need to find out how to stop these pumps. And I don't know what's going to happen when too much dead energon enters the planet's core, but I can guess the result is not going to be good. I'm urging you, please put your current projects on hold. The implications are massive and may affect the fate of Cybertron itself! Arcee, out."

Arcee is currently available for application. In the meantime, she's temped by Doomflower.