And then there was a Gas Station

Summary: Chance encounter in the desert results in an odd moment of time.

Lying in almost the dead center of the southern half of the United States, most of the area here is taken up by Texas. Easily one of the biggest states in the country, Texas is a major hub for US industries dealing in electronics and information services. Most of the farmland is used for raising cattle and growing cotton, and many also serve as dude ranches for vacationers looking for fun living like a cowboy for a few days. Massive oil wells rise over the landscape as well, churning with oil-pumping power. Above it is the smaller, pan-shaped Oklahoma, which is also rich with oil and farmland.

Red Kenworth Tractor Trailer is rolling across the open plains of the south central states, leading a convoy of Terran trucks carrying something of obvious value. Not sure what exactly, but the fact that Prime is helping to ensure security must mean something.

Katie is off in Oklahoma next to her truck, out in the open, though not far from the main roads.

Ghost is not on a mission of any kind, simply flying over the countryside, enjoying the view and considering the variances in surface styles that prevail on this, her second home.

Red Kenworth Tractor Trailer continues along a highway, lord only knows which one. The Convoy slows as it nears a truck stop, likely a scheduled rest stop for the group to refresh themselves and get much needed sustenance. Prime himself leads them into the parking lot, taking the first spot to keep a watch on the trucks.

Ghost finds herself following a ribbon of blackened asphalt, quietly tracking the tail lights of a transfer truck. She pulls back into a hover, peering down the forlorn highway to see the twinkling lights of a fill station.. Thoughts roam about in her mind and a momentary sense of mischievousness emerges as she flies towards the station, mentally remembering where she stashed something slightly important to this particular idea.

Red Kenworth Tractor Trailer settles into his parking space and removes his trailer, proceeding to transform into Robot mode while the humans head into the rest stop and take care of business.

The semi's trailer detaches as the cab leaps upward. The truck begins to unfold, and the mighty Autobot leader, Optimus Prime, lands on his feet.

Tetra Interceptor transforms, allowing her airspeed to diminish to the point where antigrav kicks on. With a blatant flare of said engines, she circles the truck stop once before dropping to land. The craft touches down behind a transfer truck and taxies after it, as if looking for a parking spot.

Optimus Prime isn't completely unaware, and as the other robot settles to the ground he immediately goes defensive, "Halt..." his voice rings out deep and true, "Who goes there." his optics look over Ghost carefully, a faint flicker of recognition tugging at the back of his mind...

Tetra Interceptor settles into the parking spot, letting engines cool before transforming back up, resting a hand on a hip and peering at optimus with a crooked grin on her face. She doesn't reply immediately, just stares with that grin. "Just a Ghost."

With a rapid series of panels unfolding, some seeming to simply dissolve, Ghost reforms into a tall, sleek femme.

Optimus Prime narrows his optics, "Ah yes... a 'ghost'. The one Uplift has had trouble with..." he straightens, arms settling at his sides, "What is your business here?"

Ghost looks around before looking back at Prime. "Refueling. This is a standard terran refueling location, is it not?"

Katie keeps sitting near her truck, a ways away, but not too far, not noticing the other too... yet.

Ghost lifts a brow, "It is a place for *paying* clientele, Optimus. Of that which I am." She grins briefly, the expression not changing the slightly cold glimmer in her optics.

Ghost gives a shrug as she flicks her wrist. A very small, for her, rectangle of plastic ends up held between her fingertips. "Could I entertain the notion that you'll help me fill my fuel tank, Prime? After all, I suppose I'm not to be trusted in allowing a native close enough to perform that particular action, am I?"

Optimus Prime smirks, "I've never seen a Decepticon willing to pay for anything before. Most of you just try to take what you want."

Optimus Prime adds, "If you wish for my assistance, that is fine, however humans -are- employed for that purpose. Expect a very unpleasant reaction if any harm comes of the human, however."

Ghost gives a tiny shrug of her shoulders, "I dont think you and I have ever really met. Applying the standard vision of the enemy to everyone that wears their emblem is the sign of a closed mind, Prime." Now the smile reaches her optics, "And I would be delighted to have your assistance."

Optimus Prime replies evenly, "I've had my mind closed by having it repeatedly slammed by one Decepticon after another doing the exact same thing, Ghost. Besides, you're more than you appear, that much I'm sure of thanks to Uplift. You -are- devious to say the least." he moves over at her request and kneels down, gingerly going about moving the fueling hose to Ghost's intake, "The bottom line is, after having so many Decepticons behave so brutishly, it's safer to assume you -will- than to assume you won't. It's not a difficult concept to envision an Autobot taking a defensive posture when faced with a Decepticon."

Ghost drops into a crouch, shifting a wing aside to make the refueling easier. The smile threatens to depart, shading slightly off before she speaks, "Yes.. Uplift.. An.. A.. Something I care not to think about. I do hope he is still functioning?" she asks quietly.

Optimus Prime says, "Yes, though I doubt he will ever really recover from the experience of meeting you as he did."

Ghost nods before she shrugs, "I endeavored to give him ample warning. Time and time again. But he chose to believe something else and.. the consequences were not something I would have wished." She frowns now, peering off before shaking her head, optics glimmering a twilight shade of lavender, "And yes, most of my counterparts have an overabundance of the brutish programming. For the most part, it makes it easier to calculate their reactions in certain situations."

Optimus Prime says, "Indeed, which is exactly what I did." he replies, "Closed mind is one thing I do -not- have. More often than not that has cost me... it cost me the first day I met Megatron. I treated him as a friend... and that is something he quite obviously was not."

Ghost snorts, "No. Megatron is friend to no one." She checks her tank, "Just a few more moments and we'll be done."

Ghost rechecks her tank before shifting her wing over the port. "Topped off and ready to fly again. Thank primus for fuel converters." Her optics glimmer briefly as she turns to rather gingerly, slide the card through the on-tank meter and wait for a receipt.

Optimus Prime nods once, "You're certainly an unusual one, Ghost."

Ghost gets her receipt and tucks the card and that away. "I get told that a great deal, Optimus." She shrugs, looking upwards at the sky briefly. "Thank you for your assistance. While the natives do do their jobs well, I prefer not to endanger them when I can."

Optimus Prime says, "That is admirable. You are an enemy to be respected, not decried. The sort of opponent you hope to find if you're stuck in a warzone."

Ghost snorts, "I'm an enemy that prefers not to make more trouble than necessary, Optimus. There would be no purpose in causing harm here, no gain for anyone. And.." She stands, checking her wings.. "I wouldn't be able to use this particular chain of fuel depots if I caused trouble. Pact of non aggression.. or something consumer like. I really should read my regulations for this fuelcard of mine some cycle." A wry smile crosses her face.

Optimus Prime smiles faintly, "I see. Why do you use the chain to begin with?" he asks, probing gently in the hopes of uncovering a potentially useful piece of information.

Ghost considers, "They are numerous and crisscross the entire North american continent. They have subsidiaries that I can go to as well.." She pauses as she narrows her optics at Prime. "And no.. No one else that I know of has thought to gain personal fuel in such a legal manner that I am aware of so you shouldn't have concern over my kind becoming prevalent in this area."

Optimus Prime nods once, "I was thinking your faction was suffering an energy crisis of some sort. But that is a relief as well."

Ghost pffts, "That isn't something I could speak of freely, Prime." She offers a wry smirk, "Although seeing you here begs the question, what are you doing so far from your home?"

Optimus Prime indicates the convoy of trucks, "Escort duty." he replies simply, not elaborating on the reasons beyond saying, "I honor as many requests from the terrans for aid as I can without letting my greater concerns suffer."

Ghost ahhs softly, "We do seem to do an immeasurable amount of damage when we put our minds to it.. Rather.. wasteful.."

Optimus Prime says, "Quite." he replies, "It's easy for me to run such a convoy escort, as I blend right in, and can assist in carrying the cargo as well."

Optimus Prime says, "I'll give you a free tip for your 'friends'. Don't try hitting any truck convoys, I've got several escorts, and I -will- repel them with maximum force if they attack."

Ghost ahhs softly.. "They aren't my friends, Prime. They are simply.. coworkers." She nods to the words, "Something I will pass along, although I suspect that will only increase their interest in the convoys.. After all. you would be a prime catch."

Optimus Prime smiles, "Perhaps it would, perhaps it won't..." he replies, optics seeming to sparkle with a hint of... is that malice? "But the message is well sent none the less."

Ghost lifts a brow before she smirks, "Yes.. the message will be sent all the same. Could I entrust you with a return message?"

Optimus Prime replies evenly, "Not to be insulting Ghost, but I'm likely more trustworthy than you are."

Optimus Prime nods, "I will deliver the message... though that too has the potential to be misinterpreted."

Ghost waves a hand as she takes alook about before she kicks off of the ground and heads upwards. She gets good clearance before transforming and heading off for her own business. 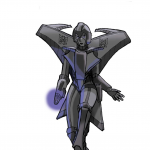