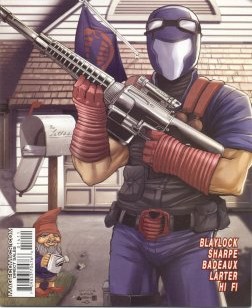 Using Battle Android Troopers, Cobra captured several American cities in a series of daring nation-wide coordinated strikes. They’ve moved in traditional troops and equipment and seized others to take control of centers of government and places like airports and police stations. Now they’ve dug in and are threatening to destroy power grids and infrastructure, not to mention millions of hostages, if the National Guard tries to interfere. Will the Joes be able to save the cities before Cobra wrests complete control?

Cities taken over by Cobra during their occupation

Cobra is using BATs to supplement the human troops to maintain control of captured cities. All these androids do is holler at people who violate curfew and subdue anybody who attacks Cobra personnel or attempts to escape the city. They have a standby mode which allows low-power operation until triggered by proximity sensors. These BATS seem to stand on every street corner. When someone not identified as Cobra passes within ten feet of them, they activate, orient on the targetted person, and speak a pre-programmed message. This message is mostly about how the city is under the control of Cobra and all citizens are Cobra's property, and also adds a set of easily-changeable orders and reminders, such as the time of curfew and the punishment for violating curfew. They are armed with stunning and pressor beams, which temporarily paralyse a target (similar to a Taser) and hold them stock still, unable to move, respectively. These BATS are monitored by a small team of technicians housed somewhere in the city. A sample message might go something like this: "Citizen! This city is under the control of Cobra. You are the property of Cobra. You are expected to obey any and all orders immediately and without question. Failure to comply will result in punishment. Curfew is eight o'clock p.m. Any citizen on the streets after this time will be subject to punishment. Mandatory broadcasts are at ten a.m. and six p.m. All citizens must observe these broadcasts and obey the orders given."

All media is, of course, controlled by Cobra. The Cobra Television Network is the only station broadcasting. It also has a radio arm. Daily broadcasts are full of Cobra propaganda and fear-mongering. They begin with a reminder that the city is under Cobra's control and protection, and that all citizens must show respect for Cobra personnel whenever they meet them. A reminder of curfew times follows, along with any other directives Cobra may want to put in place. They may be using the populace to help them do manual labour: clearing rubble, rebuilding roads, etc. They could use BATs to do this but this is part of the demoralisation and weakening of the populace. Citizens are worked hard but not physically mistreated.