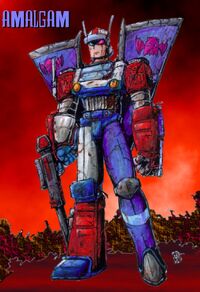 Amalgam was created after a massive battle in which an Autobot medic and several Decepticons were almost completely destroyed. Barely conscious, the Autobot medic rebuilt himself a new body out of the parts of the destroyed Decepticons around him. The process left him dangerously unhinged, and he remained in his twisted construct form even after returning to base, refusing to be rebuilt into his old form. Instead, he renamed himself Amalgam.

Amalgam's sanity deteriorated further as he became convinced that the voices of the dead Decepticons incorporated into his form continued to haunt him. Eventually these voices took over, and Amalgam went onto a rampage, killing other Transformers and incorporating their parts into a newer, larger form. Amalgam was eventually stopped and destroyed (killed and cored by Optimus Prime), and his body taken away to Cybertron by his creation Silvertail. Vestiges of Amalgam's fragmented consciousness remain, however, in a new form which calls itself Topsy-Turvy.

Amalgam was created and played by Brian Burke.