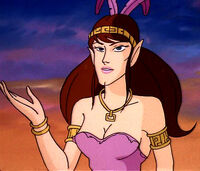 Alana is a leader among her people, the Tlalakans, encouraging them to rebel against Deceptitran, a Decepticon creation intended to squeeze energon out of her enslaved people.

She has the invaluable ability to see beyond the surface and into the heart of the matter. This enables her to realize that the Autobots who arrive at her planet are friends instead of more of Deceptitran's droids. She also develops a "special" relationship with Seaspray, who also shares her affinity for the water.

Though she has the opportunity to become a robot in order to be with Seaspray, she chooses to remain who and what she is. She reassures Seaspray that the outer appearances may be different but, "inside we feel the same."

Seaspray intercepts an encrypted message from another planet. Perceptor deduces that the message is a request for aid and Optimus Prime concedes that they must respond to it. Cosmos suggests that he can carry Perceptor, Seaspray and Bumblebee to the distant planet in question in order to help.

En route to the planet they discover that the message was from a robot called Deceptitran to the Decepticons; disappointed the team decides to investigate the situation anyway. They land and discover a civilization resembling the early human/Incan/Aztec civilizations from Earth. The human-like creatures are being enslaved by Deceptitran and his drones in order to mine, collect and refine energon for the Decepticons.

A resistance movement has taken shape on the planet through the use of a pool called the Well of Transformation that dissolves the body of whoever enters, leaving only the spirit/soul wish then forms a new body of whatever sort their heart desires. The people of the planet use it to change into merpeople so that they can secretly use the waterways for their rebellion. Any drone that enters the pool, being soulless machines are immediately dissolved to nothing as if by acid.

Seaspray falls in love with Alana and though she warns him against using the pool, assuming that as a machine he too will disintegrate. But Seaspray has to believe that there is more to himself than just a mechanical device, he decides that he must know that he has a soul, so he enters to see if the pool will dissolve him or if he will also change. The pool works and he changes into a man.

Discovering, however, that he cannot fight well as a man, Seaspray chooses to return to robot form. Alana alternately chooses to become a robot that transforms into a boat. Together they work to rescue Bumblebee (who is kidnapped) and overthrow Deceptitran's hold on the planet.

In the end, Alana chooses to return to her original form, much to Seaspray's disappointment. They decided they wouldn't let their outer differences spoil the relationship and Seaspray motors them across the water and off into the sunset.

Alana remains an Autobot ally and a leader among her people.

Alana can only change between flesh and Transformer form in the Well of Transformation. If she leaves leaves her homeworld, she is stuck in one form or another until she returns.