View source
This article is about the Decepticon Field Surgeon - for the Mini-Con pilot, see Air Lift. 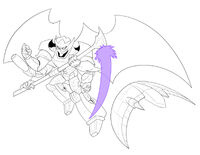 Abducted by Unicron, the medic formerly known as AIRLIFT was transformed into Styx, the mighty Reaver warrior. Liberated from the clutches of his evil master by Galvatron himself, when Unicron was destroyed again Airlift's personality re-emerged to dominate the Reaver form. Swearing his undying loyalty to Galvatron, he served with an almost fanatic devotion. In robot mode this four-armed menace still carries the scythe of Styx, and wields eye-beam disruptors and a plasma cannon modeled after Galvatron's own. In Reavercraft mode he retains VTOL capabilities coupled with interplanetary propulsion systems. A retractable turbolaser coupled with mini-missiles gives this bird a bite. Heavily armored by Unicron, Airlift is often seen streaking out of the upper atmosphere into combat zones to assist his comrades or extract fallen Decepticon warriors.

Airlift was once as many other Decepticons. A twin engine VTOL jet, he was specially outfitted for rescue operations, recovering downed comrades from the battlefield and evacuating them to safe locations to be repaired. A field medic and capable surgeon, his fortunes rose and fell with the changing winds of battle as is so often the case in the Empire. He wasn't a particularly fierce warrior, and indeed, had some rather merciful tendencies for a Decepticon. Through the strange events of the times, he even ended up befriending the human Andi Lassiter as well as working with the Autobots on a few occasions.

He received minor recognitions for his services, as well as promotions, and soon came to be in charge of the Medical, Science and Engineering division of the Decepticon military structure. His loyalty to Galvatron and the Empire were unquestionable, as were his abilities and results. Things would have likely stayed that way, were it not for the return of Unicron. Abducted by the partially reinvigorated planet killer, Airlift's form was reformatted and his personality overwritten. The Unicronian Reaver Styx was born.

At Unicron's command, Styx and the other Reaver's proceeded to wreak havoc on their former comrades. Styx seemed to have a particular fascination with the medical personnel of the Decepticon's, revealing himself in a horrific scene of carnage that left Darkmount's medical bay destroyed and countless medics in long term repair or worse. It seemed as though the Reavers were unstoppable, until at last a combined assault on Unicron himself managed to battle through and disable the Reavers before destroying the systems that were controlling the Reavers. Beaten and battered, and with their mind's suddenly restored, the abducted transformers were awakened to all that had transpired in a sudden rush as their own personalities were restored, a horrific experience to say the least.

It was then that one of the most defining moments of Airlift's existance came to pass. Reeling from the damage to his psyche and gravely injured, he was unable to flee the destruction that was engulfing Unicron as a result of the assault. For whatever reason, Galvatron himself hauled the badly damaged medic free of the destruction, and brought him back to the Empire.

The time that followed was dark, mired by suspicion and hatred of the Reaver for the actions he had been forced to take, hounded relentlessly by Scourge in particular. What's more, Airlift's form had been forever altered, the once seeker now clearly Unicronian, a four armed and menacing looking creature of violence. But the events caused Airlift's loyalty to Galvatron to grow into an almost fanatical devotion...and even more, he was determined to regain the rank and respect he had formerly commanded.

It was a long road, but eventually his loyalty was once again proven. And not simply proven, but recognized and acknowledged. Airlift was decorated twice with the Brand of Galvatron, for upholding loyalty no matter the cost, once for his actions during the Avatar incident (the supposed return of Megatron). For his actions at the Fall of Darkmount, he also received the Heart of Cybertron commendation. He regained his command rank, heading the Medical, Sciences and Engineering division for long stretches, and when not CO often as second to Scrapper.

It was during one of his sabbaticals from command that Airlift was given orders by Galvatron to undertake a deep space scouting mission, seeking signs of the other Reavers, all of which had gone missing as time wore on after the Unicronian incident. The mission turned out to be a long one indeed, the last of the reavers remaining in deep space searching for clues for almost a decade..long enough for many to assume that the last of the reavers had passed from the galaxy.

Surprisingly though, Airlift returned. His mission complete, the entire sector he'd been given to explore searched and found empty of Unicronian signatures, he returned to Cybertron. At least he attempted to...unaware that the planet had moved and so much more had transpired in his absence. Now he seeks to regain his former position of authority and get the division he'd once commanded back into proper functional order.

Airlift is and always has been played by KaerosDarkfire.