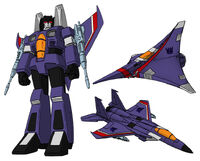 A newer addition to the Seeker Corps, Airfoil couldn't really care less for his role in the army. If he had his way, he would do nothing at all. Airfoil isn't usually happy about anything despite his rather carefree nature. He is often used as a distraction due to his ability to irritate those around him. Airfoil transforms into an F-15E armed with standard Seeker Corps air-to-air munitions. He carries a small supply of air-to-ground bombs for those 'unexpected' occasions. Though not much of a fighter, Airfoil can easily be goaded into a fight due to a disliking of his name and purple color scheme.

MUX History: In 2013, all Earth-assigned Seekers were brought to Cybertron to help defend Polyhex. Airfoil was lost in the ensuing battle against the Quintessons, but by 2020 had been found, recovered, and assigned to Hydrax Spaceport.

Airfoil transforms into a purple F-15E.

This character was played by his OOC creator. In 2020, he was @emitted by Bzero for the Hydrax Recon.