This page is for the Autobot Aerialbot. For the G.I. Joe Helicopter Assault Trooper sometimes codenamed Air Raid, see Airborne. 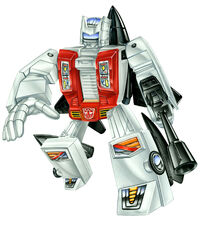 Air Raid loves surprises. He prefers to suddenly streak into a cluster of Decepticons, whether they're airborne or on the ground, over shooting at them from long range. "That always sparks their wires a bit," he laughs. Of all the Aerialbots, his tactics are the most fearless, although some might call them rash and foolish. No matter - his gung-ho, wild-eyed personality legitimizes either viewpoint. At the core of his actions is one goal that drives him above all else - he wants to have fun! And no matter what he's involved in, he achieves that goal - even in the middle of a war.

Air Raid can fly at speeds of up to Mach 2.5 and has a range of 1500 miles. He can shoot air-to-air heat-seeking missiles and, in robot mode, carries a torque rifle whose beam can apply up to 80,000 psi of rotational force to any object. Only the strongest materials can withstand warping and breaking under such pressure. He combines with his fellow Aerialbots to form the giant robot known as Superion.

His reckless behavior often leaves Air Raid exposed to greater odds than he can reasonably expect to handle.

At one point during the eternal war with the Autobots on Earth, Megatron grew fed up with how his opponents ruled the roads and created a group of Decepticon cars known as the Stunticons. In order to give his new warriors life, he brought them to Cybertron and tracked down the ancient supercomputer, Vector Sigma, to input cybernetic personalities into the Stunticons. Thanks to a series of traps and drones in their way, the Autobots failed to prevent Megatron from succeeding and returning to Earth. Seeking to even the playing field, Optimus Prime conceived of the idea of retrofitting several broken-down Cybertronian ships into Earthen jets, and bringing them to life as a team of Autobot flyers. With the help of his technical savvy soldiers, Hoist, Wheeljack, Ratchet, and Prime's own creator, Alpha Trion, Optimus' plan was enacted and the Aerialbots were born.

After his recovery, Slingshot volunteered to be a decoy as part of Skydive’s plan to investigate a plane smuggling ring. Air Raid sarcastically told his fellow jets to enjoy their 'vacation' as he departed.

Returning later to assist Slingshot and Skydive, Air Raid and Silverbolt took on Vortex, Ramjet, Blast Off and a fleet of drone jets while under fire from the Combaticons and Megatron’s purple griffin fortress. After the Combaticons formed Bruticus, Air Raid tried to distract the giant Decepticon from smacking Silverbolt, and got smacked himself instead. With the arrival of Fireflight, the Aerialbots combined into Superion and wrestled with Bruticus, then separated again. With a well-placed shot, they set an oil field ablaze and the resulting blast sent the defeated Decepticons and Bruticus flying into the sky.

Air Raid remains a valuable, if slightly unreliable, member of Autobot Aerospace. He's trained with Barrel Roll as part of the Autobot-Joe alliance.

In other news, the volcano responsible for bringing our current Cybertronian visitors amongst we Americans, and the populace of the planet Earth; Mt. Saint Hillary blew it's top again in the early hours of Tuesday morning. Thankfully, the immediate surrounding area, being the continued base of the crashlanded Autobot spacecraft is a federal law enforced 'no go' zone for non essential personnel and as a result, the eruption was received as a relatively low risk event. Due to the nature of special relationship between the Cybertronians and the US Military, our footage of the site is banned from air but by all appearances, the spacecraft is buried beneath the cooling lavaflows. Experts attribute the eruption to sudden changes in seismic activity located in close proximity to the site, but have stated that any explanations at this stage would be pure speculation. Further adding fuel to the concerns of locals however, is the apparent battle between the rival Cybertronian forces and this is expected to raise serious concerns in Congress regarding how to handle the ever present menace of a war raging on our soils and maintain the safety of civilians.

Alpha Trion returns to Earth once again, and discusses with Tyson his near-familial relationship with Dust Devil.

December 19 - A Web of Confusion

Slingshot gets to ride the spider, Cuffs knocks Air Raid on his aft, Lifeline does a drive by, Air Raid hits on Trojan, Stormwind cements herself as the peanut gallery, and Ironhide causes a record number of spit-takes

"Hallo. Please land and disarm or I will order my brother and sisters to eat you."

We received a plea for sanctum by peoples from across the rift; A Doctor Andersen and his invention, 'Three'. Both Air Raid and I decided to bring them in and offer them diplomatic host, as they have pledged - and proven - that they are of peaceful demeanor and intent. They are the parallels of Over Kill and a Vector, and have so far been very gracious guests. They wish to speak to a ranking officer about the threats that are here and could possibly come through the portals. Trojan has asked that they limit their activities to the Human quarter, the diplomatic lounge, and the off duty lounge. They are to let us know if they leave Metroplex, as well as why, where they are going, and when they expect to return. Trojan is also going to be keeping watch on them until Command clears their presence.

There was a being that appears to hail from the same place, Ebony, who attempted to murder Dr. Andersen, not too long ago. She claimed to be one of the Joes. Her exact whereabouts are unknown at the moment.

Raid stares dejectedly at the camera, then smiles as if he'd been willed to with a cattleprod. It's likely Silverbolt making threatening gestures off-screen.

"Hrm, ah, not long ago I was AMBUSHED by two seekers, Windshear and Starscream of all mechs. Minding my own business, patrolling, BEING A RIGHTEOUS AUTOBOT. Then these clowns start tailing me -"

"And I TRIED to fly away, but they were pretty relentless. Slings came to my aid, as did Dusty. Th' last thing I remember was grappling with Windy, getting stabbed right through the chest, and seeing Dusty's forcefield. Everyone's all right, it seems... And Spike patched me up great, as usual, sooo... IT'S NOT MY FAULT!" *click*