Afterburner is an evil Autobot Technobot from the "Shattered Glass" universe. 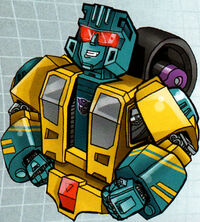 The other Autobots get tired of his unending groveling, but realize there's something to be said for a mech who'll always support your position or go along with your plans, no matter how crazy they are.

He thinks combining with the other Technobots to form Computron is a completely super-awesome idea.

Afterburner and his Technobot teammates had followed Alpha Trion before the Old One was banished to another dimension.

Afterburner and the Technobots continue to patrol Cybertron in the absence of Optimus Prime.

Afterburner is available for temping.