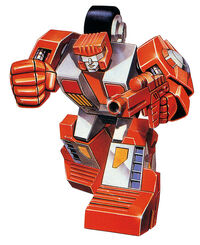 Afterburner hates authority, hates being given orders, and is generally a seething cauldron of anger. Even innocuous remarks from teammates can send him into a furious rampage. He is ruthless and relentless in battle, giving him the greatest outlet for his rage. Somehow, he can get his temper under control long enough to form the giant Computron with his fellow Technobots, and it does not affect the combiner’s mental processes.

Afterburner and the Technobots were part of a team that ran guerrilla missions against Shockwave on Cybertron during the four millions years that Megatron and Optimus Prime were missing, deactivated on Earth.

Afterburner and the Technobots continue to patrol Cybertron unless called to Earth by Optimus Prime. In 2012 they went on a secret mission for Alpha Trion. After the Dweller was destroyed, the Technobots spent months down in the tunnels below Kalis, mopping up most of the remaining Trans-Organics. In 2014, Scattershot returned to Earth to lead an assault against Decepticon-controlled Autobot City. Afterburner, Lightspeed, and Strafe went instead through the space bridge into Autobot City itself. There they met up with Sandstorm and Steeljaw, and helped deliver the cure to Teletraan II, freeing Metroplex.

After the destruction of Kimia in 2017, he was re-assigned to Iacon proper.

Afterburner is available for application. Until then, he's temped by BZero.