View source
watch 01:25
Jurassic World: Dominion Dominates Fandom Wikis - The Loop
Do you like this video?
Play Sound
The name or term Acid Storm refers to more than one character or idea. For a list of other meanings, see Acid Storm (disambiguation). 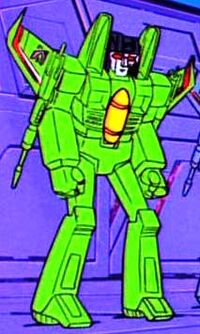 A member of an obscure squad of Decepticon air warriors known only as "The Rainmakers," ACID STORM is known as an individual only to his teammates and a very few others. He is highly intelligent, eager, and dedicated utterly to the Decepticon cause. He has a talent for marshalling vast amounts of data, as well as a way with words that would make him a powerful speaker. However, he prefers to remain anonymous, as part of his team. His hyperion-3 blasters can seed natural clouds with a highly destructive form of acid rain.

When a group of Autobots (and Chip Chase) journeyed to Cybertron to fetch a cosmotron for a wounded Optimus Prime, Megatron sent the Rainmaker trio, including Acid Storm, to make things difficult for our heroes with some acid rain.

Acid Storm remains on Cybertron in service to Cyclonus, but has obtained an Earth altmode in case he is transfered to Decepticon City.

In 2013 he was assigned to the new Air Commander Illarion.

In 2018 Acid Storm was ambushed by Knightmare over the Great Trench and taken captive. He was subsequently tortured by Delusion. Later, while recovering from this, Acid Storm realized they were nonbinary, and started using 'they/them' pronouns.

On the MUX, Acid Storm's trinemates are Ion Storm and Nova Storm.

A Decepticon Seeker is submitting this field report:

One of the Battlechargers asked me to help submit his report. He showed his report which... was spray painted on the terminals and then finger painted. I asked him to explain what happened so I can submit a follow up. Runamuck stated that he and Runabout were 'asked to do an art piece gallery walk at Fort Syck when some Mini-Bots arrived and starts causing issues. Nerd-Con went crazy and started to change colors in the optics and shot things. Jagermeister blew things up. Runabout was valiant and sacrificed himself in the line of duty. Blast Off was scared so much he turned white. We defended and the attackers left.' I am not sure what else I can say. Dealing with a Battlecharger is... not exactly the easiest.

Until then he's being temped by Bzero.