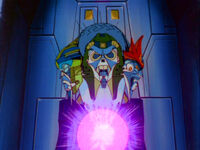 A cold despot with several eyes for strategy and tactics, Acerbitas has held supreme command of the Sharkticon hordes for millenia. Known for a vicious temper in person, many have fallen to the Sharkticon Pits for simply looking at him during Trial. However, he also prides himself in the lengths of his patience, and the impassive nature with which he views potential strategies and tactics. Little is known about his personal capabilities, for although he conducts his hordes in battle with a surgeon's precision and a dancer's grace, he prefers to have them do all of his own fighting for him.

Faced with the death of his world, Quintesson, from the time rift and the failure of the Trawler Project, Lord Kledji ordered Generals Ghyrik and Jolup to make preparations for their back-up plan: conquering Cybertron as a new homeworld for the Quintessons. The first phase of their plan consisted of an attack on Autobot City to distract the Autobots.

In 2013, Acerbitas managed the invasion of Earth. He commanded the Quintesson cruiser Bellum.

Rank: 10 Acerbitas is a Judge variant of Quintesson.

Acerbitas was created and played by Dean.