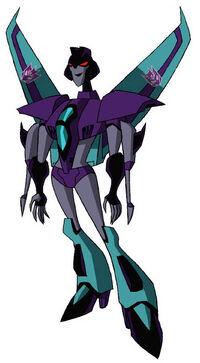 "Everyone is disgusting; what makes you any different?"

Suspicious to the core, ABYSS is an uneasy Decepticon and difficult to befriend. Although she may not say much, her judgmental attitude and lack of trust says enough in itself. Occasionally, she'll scoff at her fellow Decepticons with a sneer or a sarcastic remark. However, once her trust is gained, she is a great ally and teammate. In robot mode, she is tough and well armored, and is skilled with a sword. In F-22 Raptor mode, she cruises at Mach 1.5, but can accelerate up to Mach 1.8 for short bursts. For air-to-air combat, she carries six AIM-120C and two AIM-9 missiles. She is designed to penetrate enemy airspace and achieve a first-look, first-kill capability against multiple targets. While a great fighter, Abyss's off-putting personality is quick to garner her enemies, and she's often left without backup when situations turn bad. Considering her general attitude towards her teammates, this might be what she prefers.

MUX History: In 2013, all Earth-assigned Seekers were brought to Cybertron to help defend Polyhex. Abyss was lost in the ensuing battle against the Quintessons, and thus far has not been found and recovered. She had been shot down and captured by Overcharges, and brought into the Quintesson Spiral for study and torture. When the Dweller smashed its way through the Spiral, Abyss was crushed and presumed destroyed.

This character was played by their OOC creator.

Retrieved from "https://tfumux.fandom.com/wiki/Abyss?oldid=70697"
Community content is available under CC-BY-SA unless otherwise noted.