A Final Run Through 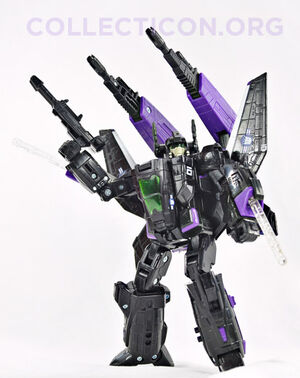 Summary: Bumblebee, Jetfire, and a skeptical Springer go through the final details of a daring raid that stands to do nothing less than give the Autobots a fighting chance against the Decepticons, or provide a situation that will go down as the Autobots' last stand against their Decepticon oppressors.

Bumblebee doesn't reply to the transmission, but when Jetfire arrives at the Temple, the little Autobot is waiting for him. "I was starting to worry." he admits.

Jetfire looks at Bumblebee and hands over the Autobot insignia the leader gave him. "It has to be tomorrow. I have access to the Space Bridge. At 1800 hours, every Autobot who can get to the Space Bridge MUST be there - and in between now and that time, you're going to have to see who can free Grimlock and Sky Lynx, because those are the only two I know that can possibly disarm the Matrix from Megatron." He looks at Bumblebee, "Do you understand?"

The Autobot leader shakes his head as Jetfire tries to return the Autobot sigil. "It was a gift, keep it." Bumblebee says. He nods as Jetfire outlays the plan, but frowns suddenly. "...Who's Grimlock?" he asks.

Jetfire lowers his voice, "Grimlock... was - a creation by Shockwave, but... I believe he was a 'error' in their plan. I think he has strong Autobot-type of behaviors that Shockwave cannot contain - I believe if you let him out, you will have an ally - and you will need him to dislodge that shoulder cannon from Megatron."

"…If he's been put in the Pits, then don't worry. We've already dug an escape route." Bumblebee says confidently. "We've been working on it for months. We knew we would need Sky Lynx's help." He smiles looking calm and confident. "If this Grimlock is willing to help us, he's welcome to join us."

Jetfire sits down and hands the insignia back to Bumblebee. "Bumblebee - I almost didn't come - THAT is why I don't deserve the insignia. For the past month - I've been promoted, I've been doing what I love - science. I was thinking - how effortlessly it would be if I just... didn't come. I even justified it - saying I'd do MORE for you if I gradually tried to moderate Megatron's position." He shakes his head and slides the insignia over to Bumblebee. "Optimus Prime would have been disgusted at my behavior."

Again, Bumblebee shakes his head, refusing to take the insignia back. "You *did* come. That is what makes you worthy of it." He smiles softly, taking a hold of Jetfire's large hand with both of his. "You're willing to risk everything, because you believe it to be the right course of action." He pauses slightly. "Optimus would be proud of you."

Jetfire puts his hand in his face and mutters "I doubt it... but speaking of Optimus... radio that friend of yours - Springer... and stay here..."

"What is it?" he asks quietly.

With a slight nod, and another puzzled look. Bumblebee starts to radio Springer. "Do you want me to ask him to come here?"

Overhead, the sound of another Decepticon patrol approaches.

While Jetfire was gone, Bumblebee radios Spiringer, asking him to come to the Temple quickly, but cautiously.

Jetfire sets one rectangular crate down and goes to the tomb of Alpha Trion. With expert care, he carefully slides the top of the tomb and gently lifts the body of Alpha Trion out and into the large crate. He then places a false bottom over Alpha Trion and fills the rest of the container with clear tennis ball-sized sensors. He shows Bumblebee. "These sensors - are used to track all the data for Space Bridge travel - readings, pressure - everything. He then fills the tomb to the top and firmly affixes the lid.

Springer, after evading Decepticon patrol, creeps in, spotting Jetfire, he frowns slightly, then looks at Bumblebee. "So you were right - he DID show up - "

The patrol passes overhead, unmindful of the seditious activity below.

Jetfire looks at Springer "Help me lift Ultra Magnus into this crate..."

Springer gives a hard, cold look at Jetfire. "If this is a trap, if you give Ultra Magnus to Megatron, I will ensure that I will only kill one more Decepticon before my spark is extinguished - and I'll give you two guesses as to who that Decepticon is."

"I told you, he can be trusted." Bumblebee says to Springer with a grim smile. The small Autobot steps toward Jetfire, and starts assisting him with Magnus. "..." He doesn't respond to Springer's threat, but he looks upset.

Jetfire places a false bottom on the crate and fills the crate up with those clear sensors again, and then places the lid on it. Leaving one more. He and Springer stand on opposite sides of Prime's tomb. Jetfire pauses, closes his optics and sighs "OK, on my mark...now..." And with that, Springer and Jetfire remove the top of Optimus Prime's tomb, revealing the ashen, lifeless, but well-maintained form of eons-deceased Autobot commander.

Bumblee mutters some half remembered prayer to Primus, words older than himself. "...You're sure this will work, Jetfire?" he asks in a quiet voice, almost afraid to disturb the air around him.

Jetfire and Springer gently place the body of Optimus Prime in the container, covers him with the false bottom, pours the remain sensors over and puts the top on. He faces Bumblebee. "It has to."

Jetfire kneels to Bumblebee and gives him a strong look. "Tomorrow - 1800 hours - on the nose. And between now and then, Grimlock and Sky Lynx HAVE to be free. I can't face Megatron on my own."

Bumblebee nods. "You won't be alone. I'll stand beside you, friend." he says with conviction.

Jetfire transforms into his massive jet mode. "Bumblebee... Springer, load the cargo into my cab."

Bumblebee steps back as Jetfire transforms. "Springer... please?" he asks. He didn't like ordering anyone, even after so many years of being leader. He steps over to Prime's casket/box.

"In case we don't talk, Bumblebee - it's been an absolutely optic-opening experience meeting you. Primus be with you tomorrow."

"Primus be with you as well, my friend." Bumblebee says quietly.

Springer nods and pats Bumblebee's shoulder. "C'mon..." He then activates a small hover and places it under Alpha Trion's casket/container and helps push it into Jetfire's cab. He then returns and does the same for Ultra Magnus. Finally, Bumblebee and Springer begin to push Optimus Prime into Jetfire's cab.

As small as he is, Bumblebee tries his hardest to carry his share of the burden. "Prime... We're going to a new home. I know you wanted us to remain on Cybertron... I'm sorry..."

Jetfire's speakers emit, "This is only temporary." He adds to Bumblebee "A few thousand years - tops - then maybe you can make another attack." He adds "Now listen, this is extremely important - the Nebulons - they will be elated to have you as guests. From my research, it looks like they've only had ONE alien visitor before - and that being died on impact. But they are like any other being - they will be inherently selfish. A few years after the wonder wears off, they will begin demanding you contribute something in exchange for all the resources you will no doubt have to use."

"It would only be fair, that we contribute to them." Bumblebee says. "To ask that they shelter us, and not give anything in return... It is not our way."

Springer takes a few cords and secures the containers of Alpha Trion, Optimus Prime, and Ultra Magnus. Jetfire then waits for the two to depart. "Bumblebee...Springer, if I can't speak to you tomorrow, it's been a pleasure."

Springer frowns, walking out. "Just show up - you've got three of the greatest Autobots in our history in your cab, don't you let us down."

<OOC> DW-Valour says, "He's going to get soooo much for them on eBay!"

Bumblebee watches Springer leave. He moves to follow, but stops. "You're coming with us, to Nebulos." he says. He's not leaving room for argument. "I will not leave you behind. We Autobots do not abandon our own.

Jetfire emits, "If I fall, do NOT hesitate, the Autobots are relying on YOU Bumblebee." He pauses and then says "Farewell...friend."

Jetfire's jets erupt as he leaves.

Springer looks as Jetfire leaves. He looks at Bumblebee and says cautiously, "Bumblebee - we just entrusted 3 of the greatest Autobots in our history to Jetfire. Tomorrow, we're going to place the ENTIRE Autobot organization. Has that set in yet? Are you positively SERIOUS that he's going to honor his part - because Megatron will pay a planet's ransom for what he has in his cab right now."

Bumblebee watches Jetfire leave as well. He doesn't respond to Springer right away. "I knew from the start what the risks were, Springer." he says somberly. "I also knew that, unless we took such a risk like we are now, it would only be a matter of time before we were all hunted down and destroyed." He sighs, his shoulders sagging, the weight of leadership appearing physical. "I can't let myself be consumed by doubts, not now."

Springer nods and lets that linger for a second as well. He looks at Bumblebee "Uhm... I think I'm going to start preparing the troops tonight. I won't mention Jetifre - just in case we have spies or bugs planted around. Just tell them to be prepared to blitz the Space Bridge and don't allow yourself to be consumed by any vendettas - our goal is to get to the space bridge and get off this planet - "

Springer adds, "The weak and most in need to assistance will go first, obviously. The transport-oriented Autobots can transport those who will need that service."

"Agreed." Bumblebee says, straightening back up. He had a job to do; no time to indulge in self-pity. "I'm entrusting you to make sure everyone gets through the Bridge Terminal. Sky Lynx and I will hold off Megatron and whoever else may come. If I fall you are our leader." Bumblebee seems calm about possibly dying soon.

Springer frowns and shakes his head. "NO - you're the leader, you're the best at rounding up the masses. Besides, Megatron can kill you with one shot - it'll take...at LEAST two to kill me."

Springer adds, "Also, for Prime's sake - we don't worry about holding OFF Megatron, we blitz him, get that blasted Matrix from his arm cannon, THEN we leave - "

"Springer, please..." He sighs. "Just - promise me. You'll take care of the others." The little Autobot looks up into the sky. A few starts twinkle in the black night. "I don't know what will happen. But I do know... That if I go through the Bridge, I will be the last Autobot to leave."

Springer gives Bumblebee a look, then nods. "We probably need to get to the recharge chambers - we'll need every bit of energon for tomorrow."

Springer looks back at the Temple of Knowledge's secret room and sighs. "Take one last look, Bumblebee. We won't be returning to this place anytime soon."

"We'll come back. I promise, we'll come back." It's sounds like Bumblebee is speaking not to Springer, but to the spirits of the fallen Autobots. He bows his head. "Springer... Thank you. For everything you're done. I... I feel honored, to have you as a friend."