View source
The name or term Alpha Trion refers to more than one character or idea. For a list of other meanings, see Alpha Trion (disambiguation).

Alpha Trion is an Autobot from the Quintesson World universe. 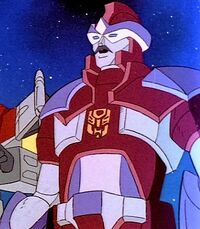 A-3 was a charismatic and technologically adept leader of the early Autobot freedom movement. Ultimately, however, his movement failed, and he was killed during an important attack against the Quintessons. Alpha Trion is one of the oldest living Transformers, and with that age comes a nuanced understanding of his race and their place within the universe. In his youth, he went by the name A-3, and in this time, he helped lead the enslaved Cybertronians in their rebellion against their cruel masters, the Quintessons. As a result, he was instrumental in first establishing Cybertron as an independent planet.

11 million years ago, a mechanoid named A-3 was part of the rebellion against the Quintessons on a factory world, creating a device called the Coder Remote that would stop their Dark Guardians. However, he didn't complete the device in time, and his cause was lost. The rest of the rebellion was forced underground. Alpha Trion, as young freedom fighter A3, helped lead the fight to free the Autobots from enslavement at the hands of the Quintessons. Unfortunately, he failed in that endeavor, and was killed for his efforts.